- Guild with guild lv.4 or above can participate in the guild quest.

- Guild quests have limits on maximum participants, and the quest can be started even when there aren't enough members. 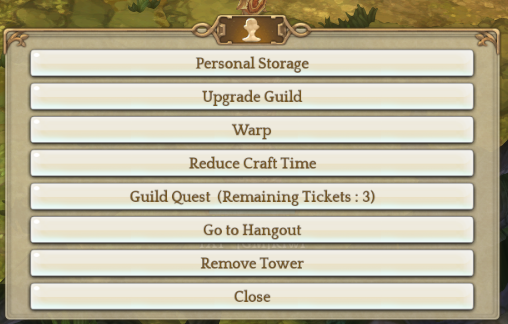 - 1 Guild Ticket is consumed per quest and 3 tickets will be given every Monday at 6 AM regardless of the guild level.

- Ticket is consumed when receiving the reward after clearing the guild quest. 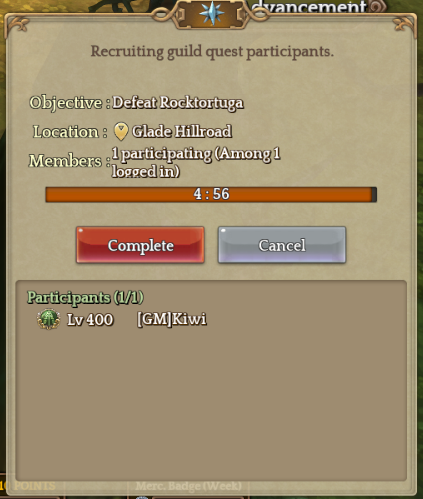 - When the guild master or an authorized guild member starts the quest, there will be a recruiting period.

- Guild master can apply the authority via the Authorities menu in the Guild Info (Alt+G).

- Character who started the guild quest is automatically added to the participant list, and other guild members can participate in the quest by clicking the Join button.

- You can start and cancel the guild quest via guild tower.

- From the Guild quest window, you can move directly to the location of each guild quest. 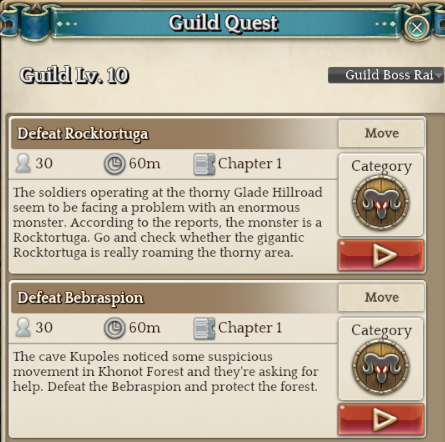 - When the recruiting is over, you can start the quest by talking to the NPC at the guild quest zone.

- You can receive various items that you can use in the guild via guild quest. (Reward Coin, Seeds, Companion Egg, etc)

[EXP you can get]

※ EXP given for the guild quest will be given only once regardless of the number of participants.

[Rewards you can get]

※ Each item has different chances, and the reward item will be given by chance.

- [Guild Quest: Sulivinas Lair] is added to the guild quest when reaching guild level 15 and there you can defeat the [Boruta].

- You can not continue Blockade Battle after leaving unlike normal guild quests.

- You can only enter when equipping 6 parts of Goddess Rank equipment.

- Effect of Glacia Legenda Armor is not applied.

- Rewards of Guild Mission: Demonic Sanctuary are as follows, and [Guild Quest One Entry Voucher] x1 can be obtained additionally by chance.

- Rewards for Blockade Battle: Demonic Sanctuary are as follows.

- Fire Flame Earring Fragment will be given to the Rank 1~6 Guilds.

- 1 of the following items can be obtained by chance when using [Giltine's Pouch: Guild].

- 1 of the following items can be obtained by chance when using [Res Sacrae Gem Cube: Guild].

※ All items from [Res Sacrae Gem Cube] can only be moved to Team Storage. 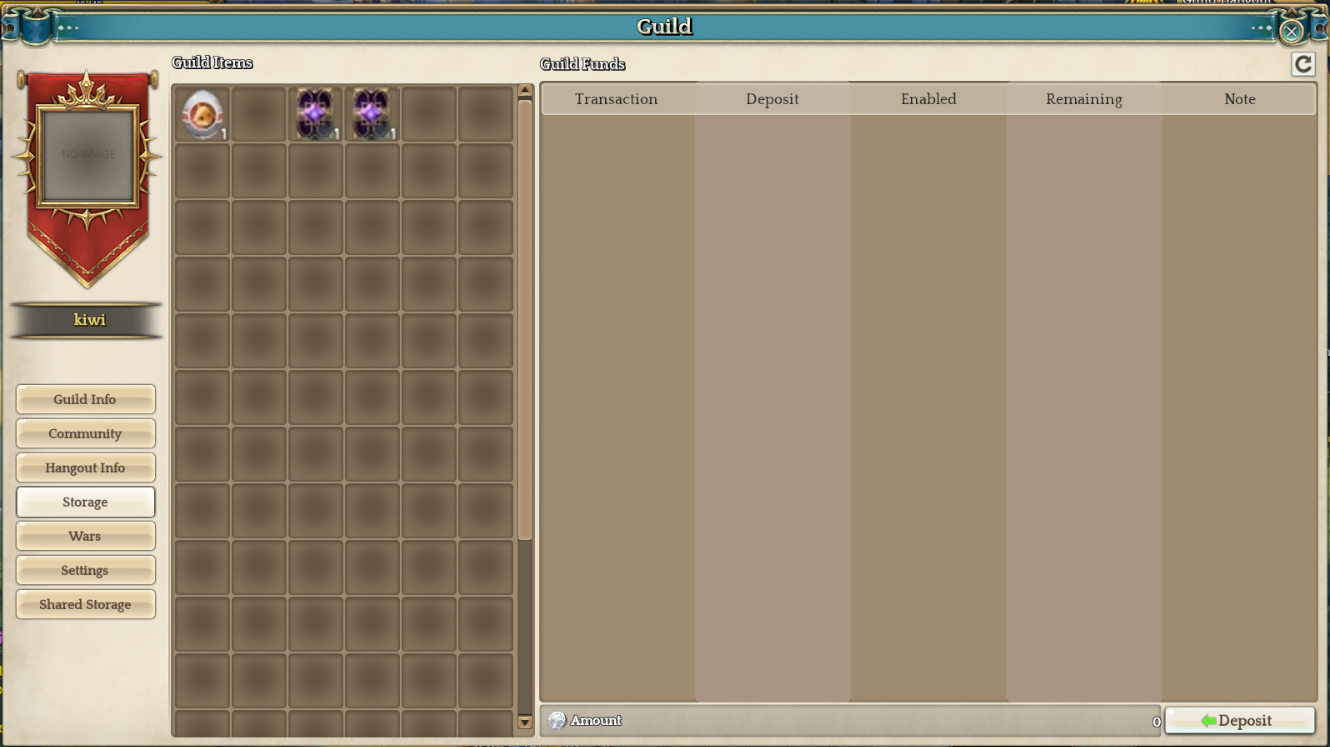 - Rewards obtained from Guild Quest or from GM are stored in the [Guild Storage].

- Guild Master can distribute the items obtained by the guild from the storage. 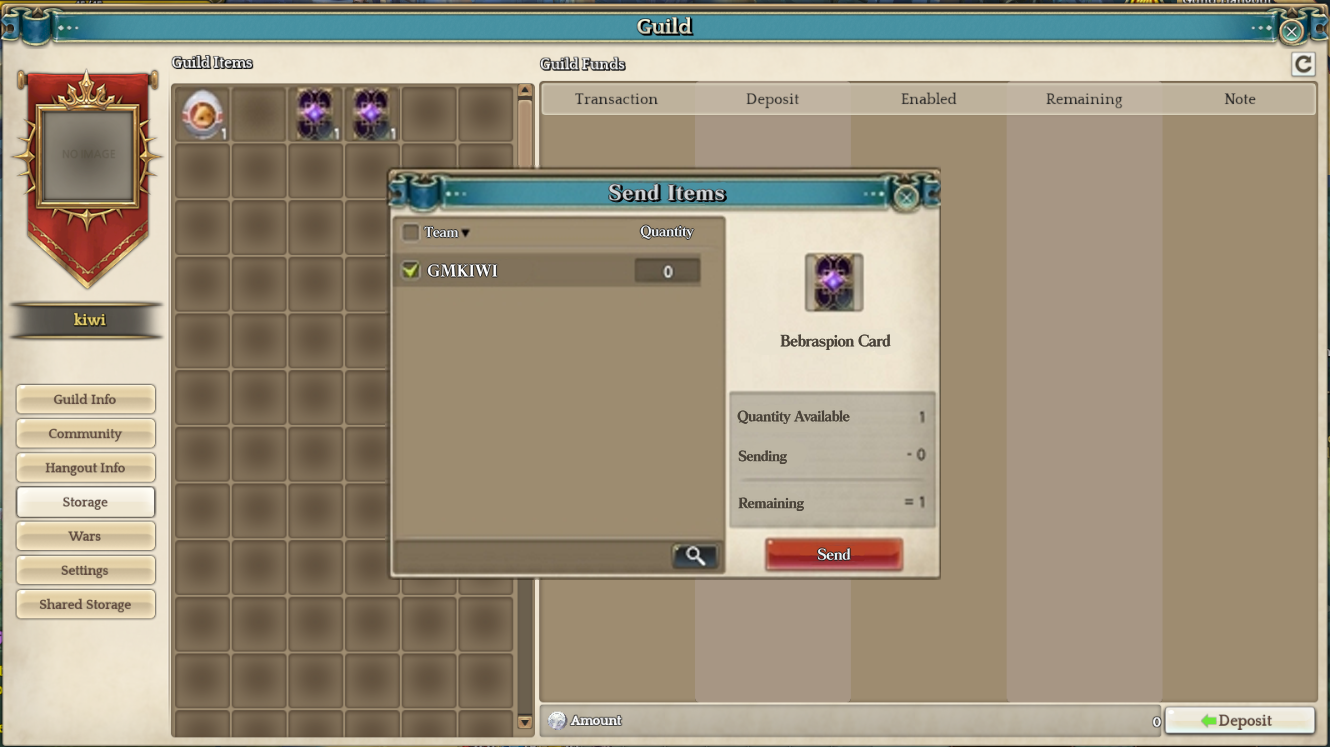 - When the obtained items can not be seen in the Guild Storage, click the

button at the top-right corner. (only the Guild Master has the authority) 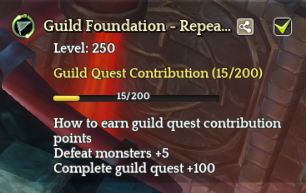 - The repeatable quest starts when a character with Lv.250 or above participates in a guild quest. This can be cleared once every week per team.

- This quest is reset every Monday 6 AM except for the ones in progress.

- 5 contribution points are obtained when defeating the monsters and 100 points are given to every guild member there when completing the quest.

- Reward will be given when obtaining 200 contribution points.

- Every Sunday on the following schedule.

※ Saviors who left the guild within the past 7 days can not participate in GTW.

- You can check the spot area at the 'Colony' section of the top-left corner.

- You can enter the spot area via Move Area NPC (green arrows or portal) from the nearby area.

- A maximum of 15 people can enter a single area per guild.

- Players without guilds or TOS Support Guild members can not enter areas of the Territory War.

- Interact with the [Territory Tower] for 5 seconds in the spot area to occupy. (Occupying canceled when hit while interacting)

- [Guardian] buff is stacked at regular intervals when occupying an area or entering a spot that has been occupied.

▶ [Guardian] buff is removed when leaving the occupied area, and it starts stacking again from 1 when re-entering.

※ Token Travel and Warp Scroll can not be used within the GTW spot area.

※ The locations of friends are hidden during GTW.

- Battle Info UI of GTW is as follows.

- By clicking the 'Return' button in the UI, you can force the guild members to retreat. Only the Guild Master can use this function and this moves every guild member that entered the area to the town.

- You can check the location of the guild members in the GTW area from the UI and how many and where the members are located in each area as well.

- The Guild that occupied a spot area can receive the tariff from the town where the occupied area is located.

※ Weekly City Tariff can not be adjusted and the tariff rate is fixed to 10%.

※ The [Victory Rewards] will be reset an hour after the end of GTW and only the Guild Master can receive it within 7 days from the day given.

※ The rewards not received within time or before disbanding the guild will be deleted.

- The Guild that occupied a spot area can receive a certain percentage of the market commission fee that occurs during the week.

- Tariff is accumulated at the Guild that occupied the spot area according to the Tariff Rate when consuming silver via the NPC located in each town.

※ The content above may change due to updates and modifications