-The 'Team Battle League' is PVP content where you can enjoy combating players that are from the same regional servers.

- You can participate/spectate or check the ranking of the Team Battle League by pressing the PVP tab in the Contents Status Board [F10].

- The conditions of Team Battle League are as follows.

▶ Attribute Achievement Rate 80% or above

※ There are no limits on Spectating the battle.

- You can participate in Team Battle League by clicking [Join] in Contents Status Board [F10].

- Healer will be distributed evenly to each team. (if there is Priest, Kabbalist in your Advancement, you'll be judged as a Healer.)

- Character selection will appear when clicking on the empty slot (+), and you can register the character from the right side of the list. The registered character can be removed by clicking the “X” on the right upper side of the slot.

- Only characters with Lv.460 appear on the character list.

- After entering the Team Battle League, 20 seconds will be given before the start so that you can change the character.

- You can change the character to the registered one by clicking the ‘Change Character’ Button on the right upper side in the changing point in time before the next round.

- If the healer is included in the exchange character list, you cannot participate in the Team Battle League.

- You cannot use skills during the preparation time before the combat.

- Preparation time is 5 seconds and the count down will be announced by the sound.

- You can play wider by controlling the scroll wheel.

- Team name of the defeated character will appear when defeating the enemy.

- Team who wins 2 times first gets to win the battle.

- Team with more survived characters wins each round.

- You can see the details of the combat after the round.

※ Scroll made by Pardoner cannot be used during the Team Battle League.
※ Dullahan Card is applied once per round.
※ Every item besides potion from the shop, Alchemist Recovery Potion, Antidote, Companion Feed, and items for skill is limited to use.
※ You cannot move the area or log out once you are matched.

- You can change the Settings of PVP in Game Settings.

- Simplify Models: Costume for each class and hair style of gender appears the same.
- Simplify Buff Effects: Buff effects don't appear. (Effect of tile buffs appears.)
▶ Icon will appear above the character's head and right side of the HP gauge according to the type of buff.

- You will be able to watch battles in real-time without participating by [Spectating].

- You can spectate by clicking the Team Battle League icon or via Contents Status Board [F10].

- You will also be able to [View from the Player's POV] if you become incapable of combat.

- You will be able to chat anonymously while you spectate, but players in the arena will not be able to see it.

- Please note that you cannot use any skills when you are spectating.

- You are able to select characters you wish to spectate from by clicking on them. (you can change the character whenever you want)

- You can check the team by the outline. (ex. character with a red outline belongs to team red)

- You will be able to stop spectating at any time by pressing [Exit Spectator Mode] or wait until the battle is over to be automatically disconnected. 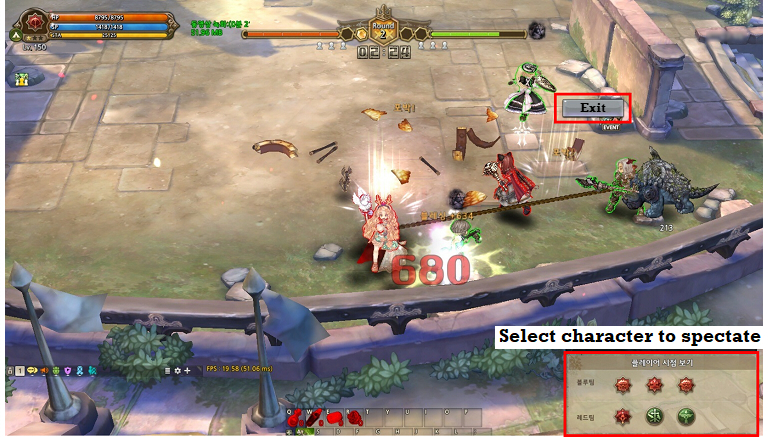 - According to the score difference with the opponent, the score obtained, deducted is affected.

Ex) When you win from the opponent with a higher score, the score you get increases.

- When winning one round, the yellow orb next to the Round is filled, and every character will be moved after the battle is over.

-Everyone will be moved to Klaipeda after the rounds are over.

- Reward will be given according to the result and MVP will receive an additional reward.

- You will receive Class Point: 50 regardless of the result.

- There are no limits in Class Point acquisition per day, but cannot be received more than the weekly limit.

- Class Point received from Team Battle League cannot be received when you already have maximum points.

- Some of the items sold at the Team Battle League Shop have a purchase limit.

※ Every items can only be moved to Team Storage.

- Title/Achievement will be given when the conditions are met.

※ The contents above may be changed as results of patches.