-Hethran Badges are a type of symbol badges named after a former head of the Kedoran Merchant Alliance, and like most items in TOS, they can be used by right-clicking them from your inventory. Using Hethran Badges gives you access to exclusive quests that you can complete as many times as you want. 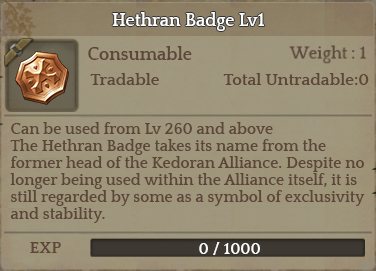 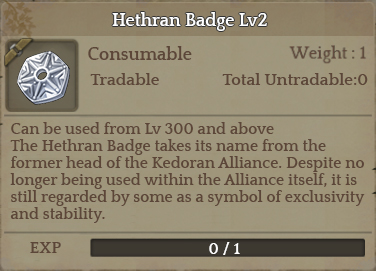 How do you use a Hethran Badge?

1) First, move to Klaipeda, Orsha or Fedimian (the badges can only be used in town).

2) Go to the Item tab on your inventory and right-click your Hethran Badge. It will be under the Consumable category.

3) A random quest will begin, depending on the level of the badge you used.

-Note that you can’t play two Hethran Badge quests of the same level simultaneously. If you’re playing a quest obtained from a Lv1 badge, you will need to complete it in order to get another quest from a different Lv1 badge. You’re allowed to have one Lv1 quest and one Lv2 quest in progress at the same time, however.

-Also, there is no limit on the number of Hethran Badge quests you can complete in a day, so you are free to use as many badges as you like.

▲ The quest starts automatically after you use a Hethran Badge from your inventory.

▲ The badges can only be used by characters of levels 260/300 or higher and in town.

-Once you use a Hethran Badge, nearby party members will also be able to accept the quest and play together, even if they don’t have a badge themselves.

-However, if another party member already has one Hethran Badge quest of the same level as yours in progress, your party will not be able to accept your quest.

Where can I get some badges

-You can obtain Hethran Badges from a series of maps with recommended levels ranging from 261 to 327. The chances of obtaining a badge vary from map to map, however.