- Heroic Tale is casual content that does not require a condition other than character level. The stages must be cleared within the time limit of 30 minutes.

- You can proceed with the Heroic Tale Tutorial from the NPC [Mysterious Storyteller] in Klaipeda to check the content process.

▶  Heroic Tale can be proceeded regardless of the tutorial process.

- When one or more condition below is met, additional party members can not enter and re-entering is unavailable.

1) 5 minutes after the party member first entered the stage

- Entry Level: Character Lv.450 or above

- You can enter from the Contents Status Board [F10] after purchasing the entry voucher from the Mercenary Badge Shop. (Can be purchased 3 times a week per team)

- Entry Count of the Heroic Tale is deducted after clearing and receiving the reward.

- You can check the main monster information and map information (mission, map pattern) from the Contents Status Board.

※ Cannot enter when the ranking is calculated: every Saturday from 0 ~ 6 AM.

- In Heroic Tale, you must clear a total of 5 stages, one by one, after the preparation stage.

※ You will resurrect on the spot after a certain period of time when becomes incapable of battle.

- Upon entering Heroic Tale, the equipment of the character is disarmed and the Title/Card effect/Enhance Attribute(Enhanced Upgrade Arts, Common Attribute included) is deactivated.

- 5% additional damage is applied in Heroic Tale.- When leaving the Heroic Tale area, exclusive item/buff/point will be removed and reset.

- After 3 [Heroic Tale] Equipment Summon Voucher is given additionally, the items sold in the shop changes to necklace. (Weapon purchase unavailable).

- During [Preparation Stage], you can prepare the character by changing property, enhancing equipment, purchasing and upgrading buff with the heroic points.

- You can obtain the points used in the Heroic Tale by the following.

※ Points acquired by hunting monster varies according to the area of the Heroic Tale.

- Stage begins 30 seconds after the majority of the character entering is ready, and starts right away when every character is ready.

- Monster with 1 of either Bless, Nature, and Corruptive property spawns when the stage starts. Enhance buff is applied randomly to the monsters and stat, buff, pattern of the monster changes according to the stage.

- 1 mission proceeds per each stage.

- The objective of the mission is written on the right, and this changes according to the area. 5,000 points are given when clearing the mission.

- The type, property, and defense type outside is not applied to the monsters in Heroic Tale. The Compatibility is decided according to the property and enhance buff of Heroic Tale.

- You can check the property and enhance buff of the monster at the start of the stage.

- You can check the current status of the Stage and Property/Compatibility/Enhance Info. of the monster at the bottom of the window.

- However, the property of the last boss monster of Stage 5 is always 'Chaos'.

- Special monster that specializes in the pattern of each map spawns according to the map. (Equal Property of the monsters in the stage)

- 1 of the following reward will be given by each chance when hunting 'Golden Monster' during the stage. The reward is given to all characters but it may differ by character.

- Preparation stage is given when clearing 1 Heroic Tale Stage.

- You can change character property/purchase buff/enhance equipment during the preparation stage.

- You can select the property of the monster upon entering Heroic Tale. The first selection is free but 3,000 points are consumed when changing property afterwards.
- UI appears when clicking [Property], and you can select and change to either Bless, Nature, and Corruptive property by clicking the icon.
- The compatibilty applied in Heroic Tale is as follows. 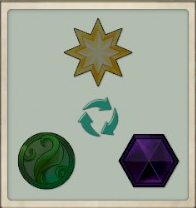 - Compatibilty is applied according to the property of the monster.
※ Number of party members (Max. 5)

- During preparation stage, you can enhance the exclusive equipment by using points. (Maximum 2 per equipment) 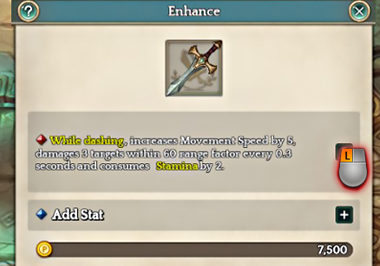 )at the bottom of the equipment to add a random stat to the equipment. (Does not change to a stat equal to previous stat.)

- Purchase the buffs prepared to deal with the monsters specialized for the Heroic Tale.

- You can set the buff to apply from the check box, and can change the buff applied from the UI at the left-above even when it is not preparation stage.

※ However, a duration of 10 seconds are applied when changing buffs.

- Click the buff button in the UI to enhance buff by purchasing, combining and upgrading the buff. 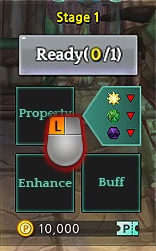 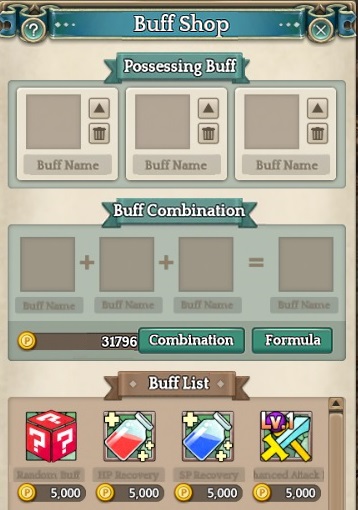 - The purchased buff can be checked from the Current Buff list. When you have purchased 3 buffs, you can not purchase any more.

- You can combine buffs by registering the buff you wish from the buff list and the Current Buff list. Right-click to register buff.

- Place the mouse over to check the price consumed for the combination. 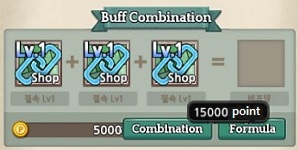 - Combined buff is moved instantly to the current buff, and can not combine any longer when there are 3 current buffs.

- 'Hidden Buff' is added in the buff shop by a low chance when combining buffs.

" button to upgrade the buff.

- 1,000 points are consumed to upgrade buff and can be upgraded up to 5 times.

- Hidden and certain buffs can not be upgraded.

- You can sell the buff by pressing “

” button next to the buff you have at the Buff Shop.

- Can not sell buffs currently in use. Please uncheck the buff from the list to sell.

- Use a coupon that doubles the point obtained from the [Point Coupon] UI.

- Point Coupon can be used after clearing Stage 1.

- ALL IN coupon can be used only once during the total stages.

- Point Coupon can only be used during the preparation stage.

- Ranking is calculated according to the clear time of the Heroic Tale Stages. (Minimum 100 score)

- The Time Cleared per each stage is added and you can check the time cleared/total time of the stage by system message at the end of each stage.

- Bonus score is given in the order of the remaining points in the party at the end of the Heroic Tale.

- Check the ranking and reward per ranking from the Contents Status Board [F10]. 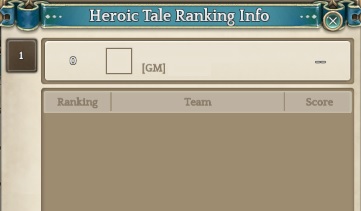 ※ Preparation Stage is not included in the time cleared.

※ Ranking is not registered when failing to clear the final stage.

※ Ranking is only registered when entering by Auto Match.

- All of the following items are given when clearing Heroic Tale.

- Reward is given according to the Ranking

※ You can not use Hero's Memory (7 Days) in PvP areas or while moving.

※ Hero's Memory (7 Days) will be given to the inventory. It is a buff item that can be registered in the Shortcut and is not consumed at use.

※ Apply [Hero's Memory] buff to you and your party members by right-clicking the item.

Achievement and Title will be given according to the number of Heroic Tale cleared.