- Goddess equipment can be moved only to the Team Storage. Once equipped, it will be character bound. (unable to dismantle)

- Vasilisa Equipment types are as follows.

- Vasilisa equipment can be obtained by Equipment Succession via [Goddess Rank ​Equipment Management] or by crafting.

- Same amount of material is needed per every part for Vasilisa equipment.

- Goddess rank equipment can be obtained by Equipment Succession or Craft via [Goddess Rank Equipment Management].

- You can craft Goddess Rank Equipment by using the materials from the raid. 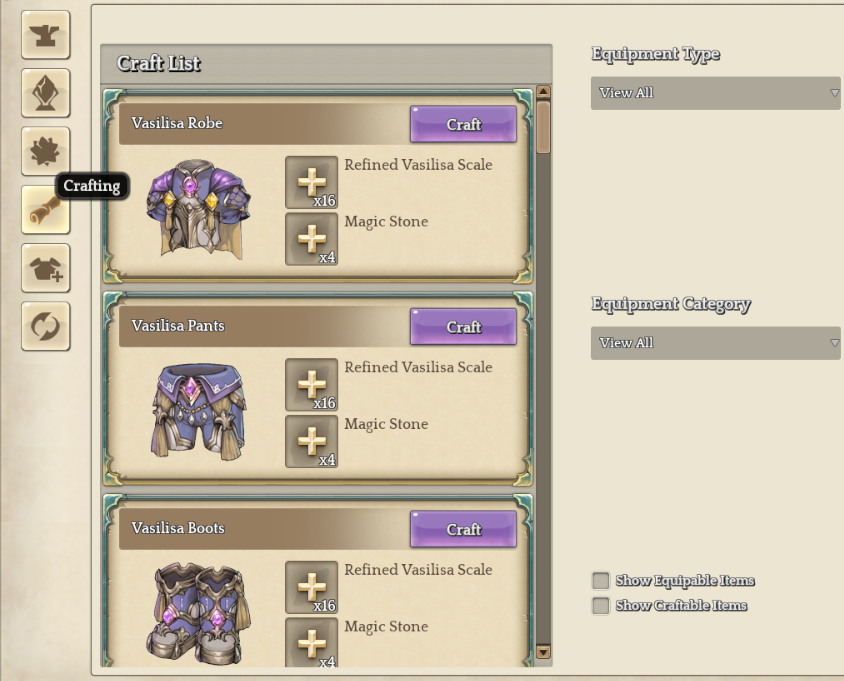 - Every Vasilisa equipment requires an equal amount of materials per part.

- You can craft the next grade Goddess Rank Equipment by succeeding the existing equipment via Succession. 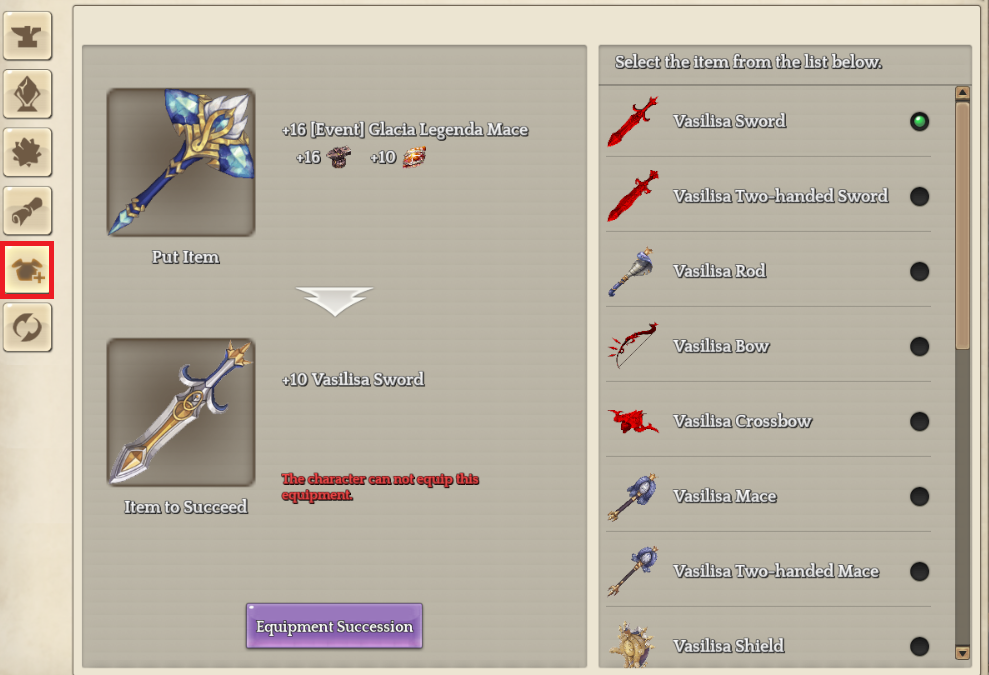 - Vasilisa equipment can be crafted by Lv.440 Legend rank equipment (Glacia Legenda, Savinose Dysnai) with 8 TRA or above.

- Enchant stat and Enhancement value succeeds by 2/3 of the previous value when the equipment before the succession is 11 ENH 10 TRA or above.

▶ For the corresponding equipment, Enhancement Supplement (Untradable) won't be given when it's not 10 TRA even it has 22 ENH or more.

- Each character has 2 Engraving Slot, and 5 additional slots can be created for all characters in the team by using Engraving SlotVoucher (premium item). 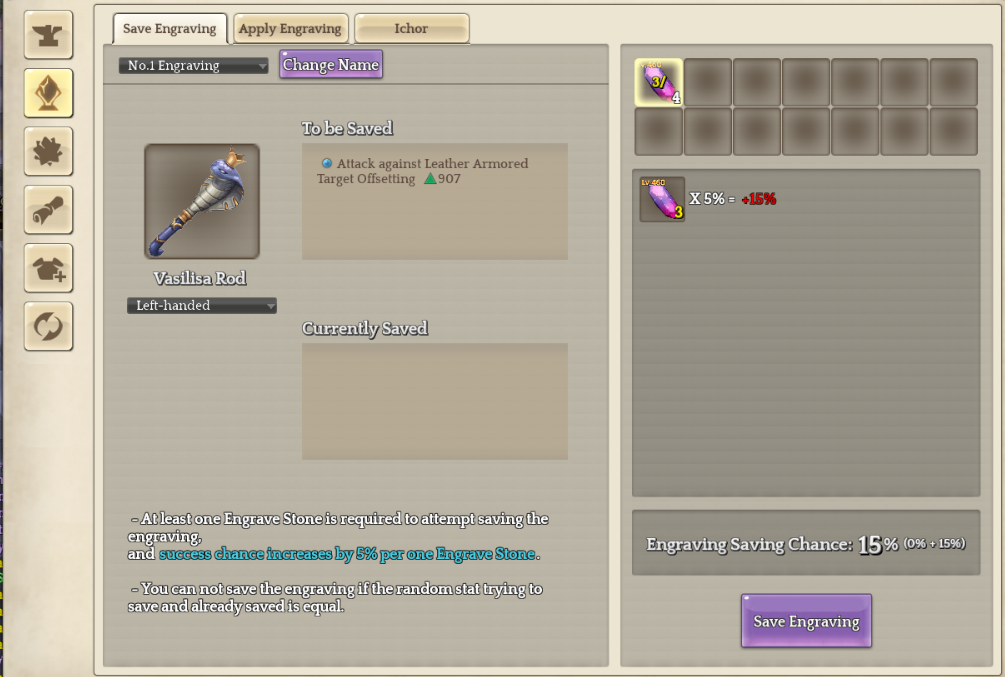 - At least 1 Engrave Stone is needed when Engraving. Engrave Stone can be obtained from Unknown Sanctuary (Sole Hunt) by defeating monsters (by chance), o

- You can increase the success rate of Engraving by 5% per Engraving Stone. You can check the rate of Save Engraving by registering item.

- Chance to succeed in Engraving of Lv.430 Armor Random Option Ichor is 100%, and the Ichor expires after saving the stat.

- You can set the saved Engraving in the [Apply Engraving] function, and the number of Goddess Token (Gabija) needed for applying Engraving differs by the Engrave stat level.

- You can check the number of Goddess Token (Gabija) needed for applying Random Stat by checking the checkbox after setting the Random Stat applied to each equipment.

- Socket is a function that manages the Gem Equip/Unequip, and Open Socket.

- Every Goddess equipment has 2 Gem Sockets, and the Gem differs according to the weapon/armor.

- You can register the Gem in the inventory to the socket by dragging the Gem to the UI.

- When opening every normal socket of Goddess rank weapon, you can open the Aether Gem Socket that can equip Aether Gem.

- [Lv.460] Aether Gem Socket Key (Untradable) Recipe can be purchased at Goddess Token (Gabija) Shop and can be obtained in Unknown Sanctuary by a certain chance.

- When extracting the equipped Aether Gem Socket, 'level of equipped gem x100' silver is consumed and the level of gem does not decrease.

Forge is a function that can manage Enhancement, apply Enchant, Transcendence, and Evolve.

- Goddess rank equipment can be enhanced up to 30 ENH.

- Goddess Token (Gabija) and Refined Vasilisa Scale are consumed when enhancing the Vasilisa equipment and Anvil items are not used. 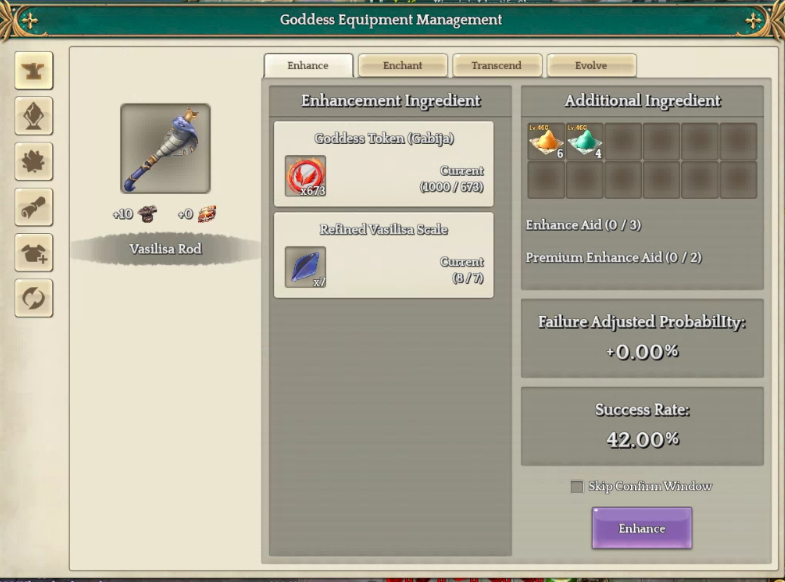 ※ You can register the Enhancement material by left-clicking the item.

- Enhance Aid can be obtained in Unknown Sanctuary.

- You can purchase Premium Enhance Aid at TP Shop.

- ENH value does not decrease when failing the Enhancement, and the success rate increases every failure by a certain rate according to the final success rate.

- Goddess rank equipment's Enhancement rate and amount of consumables are as follows.

- When applying the Enchant, 1 Goddess Enchant Jewel appropriate for the level of the equipment is required. Once you apply the stat, you cannot return to the previous stat.

- You can obtain Goddess Enchant Jewel in Unknown Sanctuary by a certain chance or at Season Coin Shop.

- You cannot transfer Enchant from Legend equipment to Goddess equipment.

- You can transfer Enchant only to the Goddess rank equipment with equal level.

- When Goddess rank equipment evolves, basic weapon ATK increases by 5% and effect is added to the weapon appearance.

- Evolution Stone can be obtained in Unknown Sanctuary by a low chance.

- Type chance is a function to change Goddess rank equipment into another type. 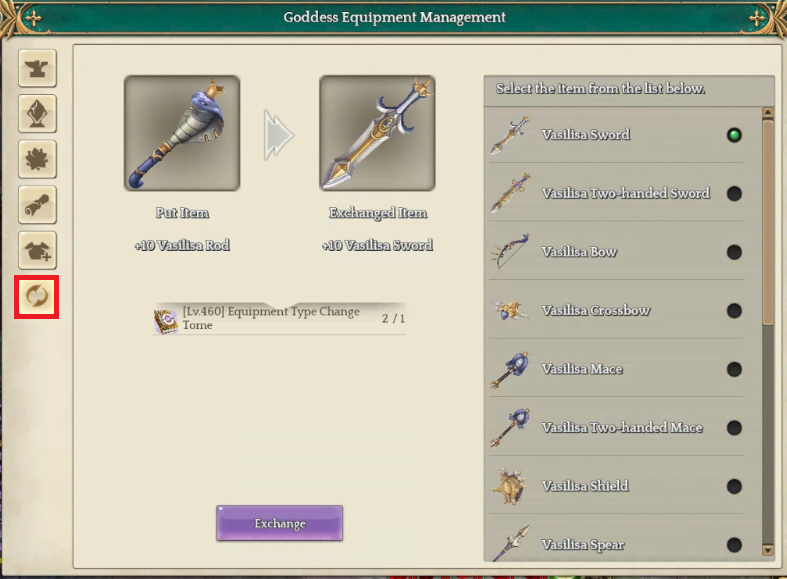 - Awaken stat can be applied to the Goddess rank equipment via Alchemist Shop or Personal Shop.

- Recipe of Lv.460 Awakening Abrasive can be purchased in the Goddess Token (Gabija) Shop.

- You can transfer Awakening only for Goddess equipment with the same part(type).

EX. Dagger→ you can transfer stat only to the Dagger

- You can apply Set Stat to Goddess rank equipment via [Alchemist Master] NPC or [Professional Alchemist] NPC in Klaipeda.

- You can exchange items into materials for Goddess Rank equipment.

- Some items can be exchanged for a certain item via Goddess Ingredient Exchange Helper NPC.