- Assister is a content to achieve and grow monsters that aids in battle direct and indirectly.
-The achieved Assisters can be summoned in Casual Raid, Remnants of Bernice Dungeon, and Weekly Boss Raid and fight alongside battles. The character’s stats can be increased by growing and combining the Assisters.
- Assisters take the figure of miniature boss monsters, and can be achieved in card form.

※ The following content can be adjusted after updates.

- Start [Assister Quest] by visiting the NPC [Geraldasia] in [Klaipeda] with a character over Lv. 100. Assister Cabinet will unlock when the quest is cleared.

- The limit in level only exists for unlocking the cabinet for the first time. Using and applying the Assister does not have a level limit.
- Assister cabinet is shared by the team when a single character in the team completes the Assister quest.
- The shortcut to the Assister Cabinet is Alt + T. 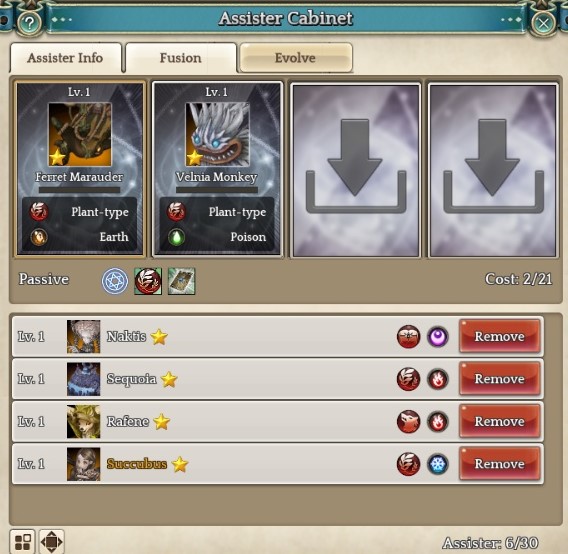 - The background color of the Assister indicates the original power grade. The grades are divided into Normal, Magic, Unique, and Legend which affects how the Assister performs in battle.
- Assisters can be evolved by fusing 3 Assisters of the same kind and grade and can be evolved until 3 stars maximum. The star under the Assister image, stats, and number of skills increase by evolution. 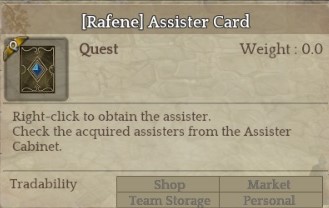 - Click "+" button in Assister Storage UI [Alt + T] and use silver to expand Assister Cabinet by 10.

- The cost provided at the beginning is 21, and you can expand the cost by clearing a certain stage in Assister Dungeon or by clearing content.

- An additional effect is applied when the Assister is registered in the slot. The effect is applied to the character and the summoned Assister. The passive effect contains Original Passive and Combination Passive. 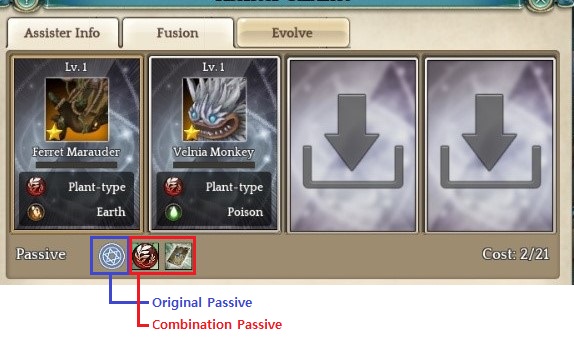 - An additional effect is applied when the Assister is registered in the slot. The effect is applied to the character and the summoned Assister. The passive effect contains Original Passive and Combination Passive.

- You can [lock] the Assister by pressing the lock button. Locked Assister cannot be fused, evolved, deleted.

- Assister Dungeon is a content where monsters can only be defeated by using the Assisters in possession.
- 5 stages are considered as 1 area in the Dungeon and up to 10 areas can be proceeded.

- Reward will be given on the first clear of each stage. Participation rewards are given when defeating the Boss once daily.

- Stage Rewards are reset every Monday at 6 AM Server time. 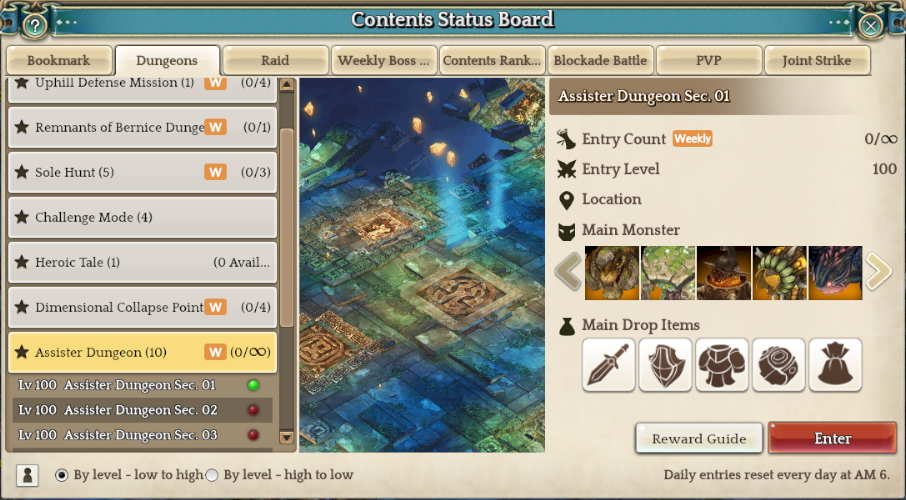