-Companions follow your character, help out in combat and gain Exp to level up.

-Companions can grow to a maximum level 470.

- You can use the shop via Companion NPC in Klaipeda and Orsha. 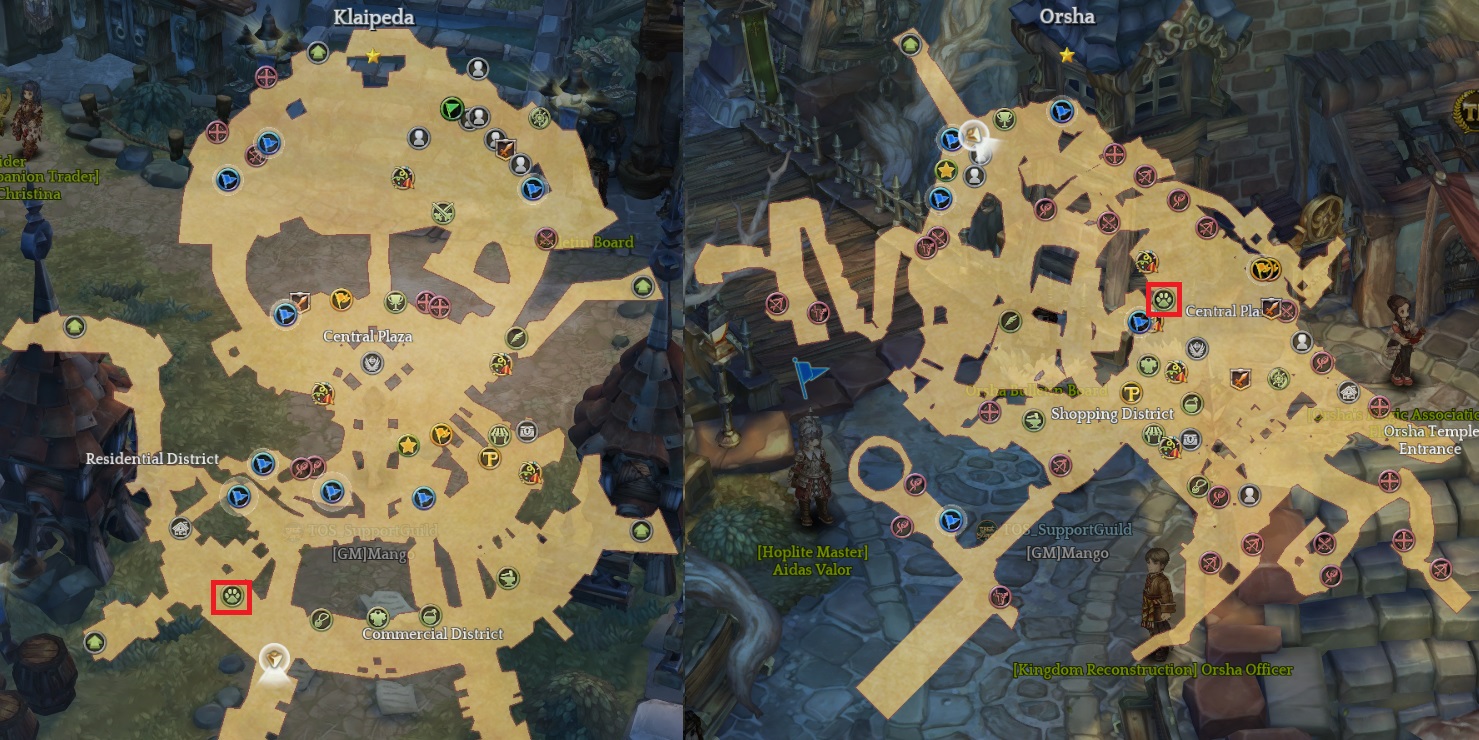 - You can adopt a companion or purchase pet food via Companion Shop. 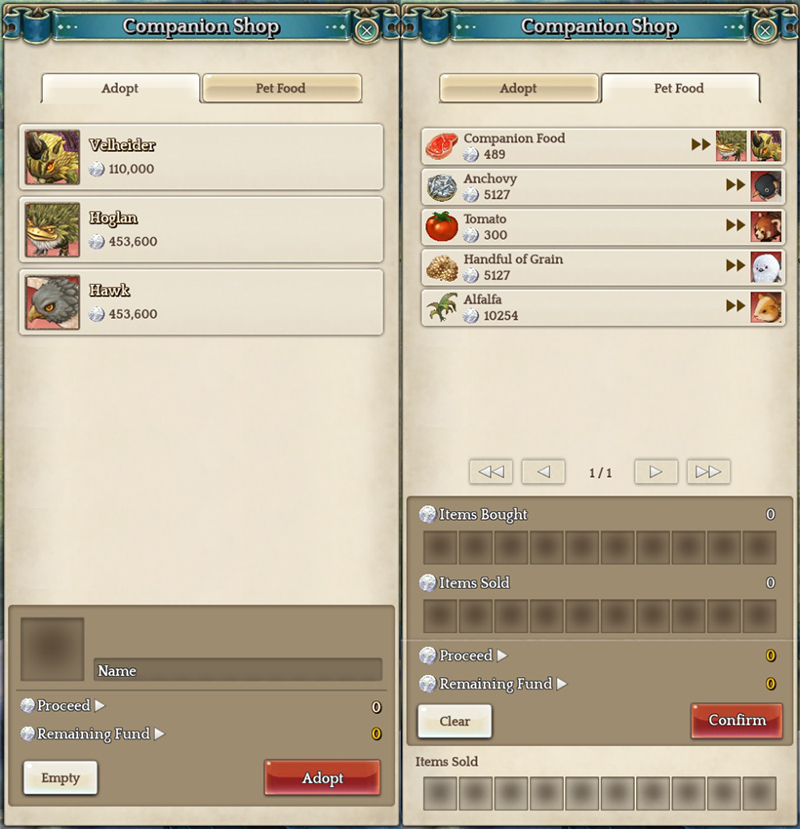 - Companions other than Velheider/ Hoglan can be mounted without having Companion Riding attribute. (you can mount by pressing Alt + ↑)

- Only the Falconer class can use Hawk / Toucan.

- You can get Companions by following ways.

- Use silver to train your Companion via Companion Trader NPC.

- Press (+) of the category you wish to train and press save to increase the stat.

- You can easily check the total cost before saving the changes and you can reset the change by pressing the reset button next to the Save button. 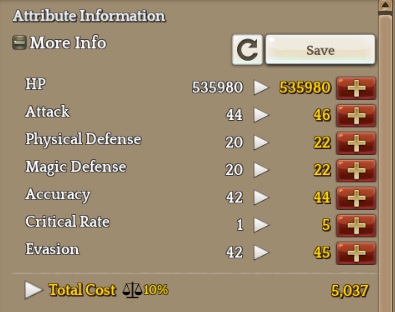 - The training fee increases as the level increases.

- Companion can equip weapons and armors.

- You can see the number of equipable weapons and armors via Companion Info. 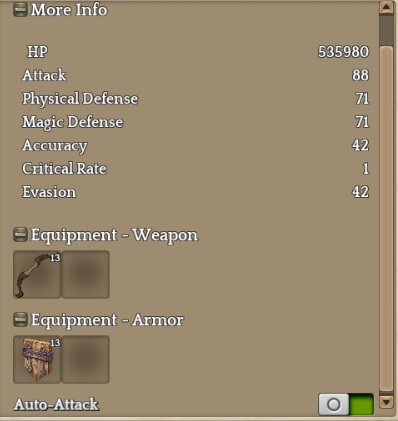 - Each companion has a different number of available Weapon and Armor.

- You can check the number of equipable equipment via Companion Info (F9).

① The weight of weapons and armor equipped to the companion is included in the character's weight.

② Equipment that is untradable or bound cannot be equipped to the companion.

③ Companion cannot equip equipment that has a higher level than the companion.

-Only Hunter classes can perform attack skills while mounted on a companion.

-You can associate or disassociate companions and characters at the [Lodge].

-Only some classes can mount certain companions in battle.

- You can change/deactivate the companion at the [Lodge] or in the Companion Info (F9). [Lodge Guide]

- Most characters can only be followed by one companion at a time.

- However, Falconer characters can, under the right circumstances, be accompanied by two companions, eg. Hawk and Hoglan, or Hawk and Velheider.

-  ※ Characters cannot be followed by two companions of the same kind or both Hoglan and Velheider at the same time.

- Classes that learned the Companion Riding attribute can use an attack skill while riding the companion.

- Companion purchased via TP shop can be mounted even when you don't learn the attribute. However, you cannot use the attack skill while riding on it. 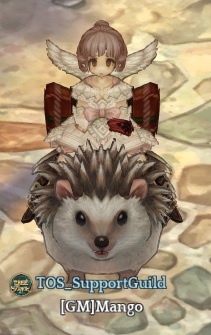 - You can summon and dismiss the companion in-game.

- Even when you didn't bring along the companion from the lodge, you can see the list of companions you have by pressing Companion Info (F9). 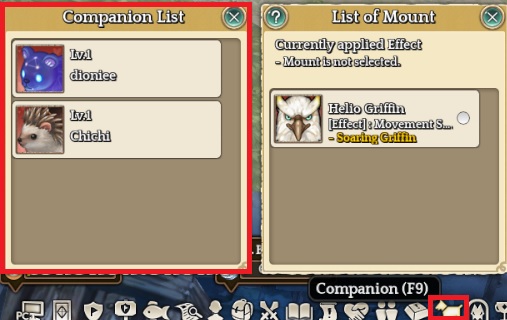 - Right-click on the companion you want to summon.

- You can dismiss the companion by clicking the list of companions in Companion Info, or by pressing Shift + R key. 60 seconds of Cooldown will be applied to the dismissed companion to be re-summoned. You can change the dismiss shortcut key in key settings - Combat - Return Companion.

- You can drag the companion icon from the Companion List and register to the quick slot.

- You can turn your companion to the rest mode by pressing the switch in the [Companion Info]. 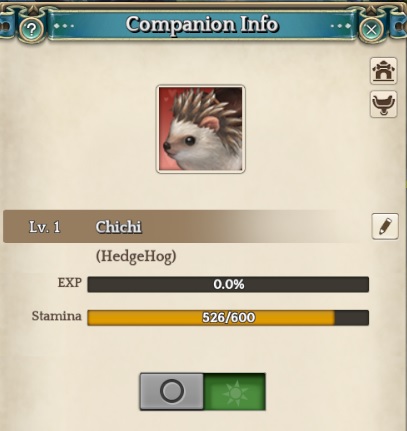 - Companions you've purchased from the TP shop have a special bonus buff.

- You can interact with your companion by pressing the Space bar key while facing the companion or by pressing Alt + shortcut key. 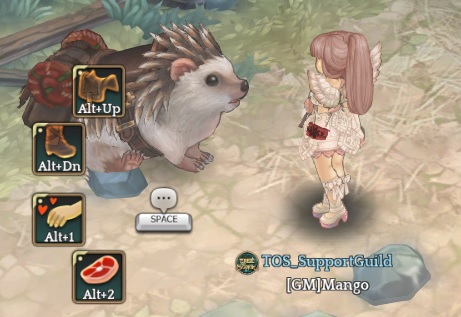 - If you bring along a companion, the companion's STA is consumed and the speed rapidly drops when it becomes 0.

- You can recover the STA by feeding the Companion.

- You can purchase Companion's food via Companion Trader NPC.

- HP will be fully recovered and some of STA will be recovered when you feed the Companion. 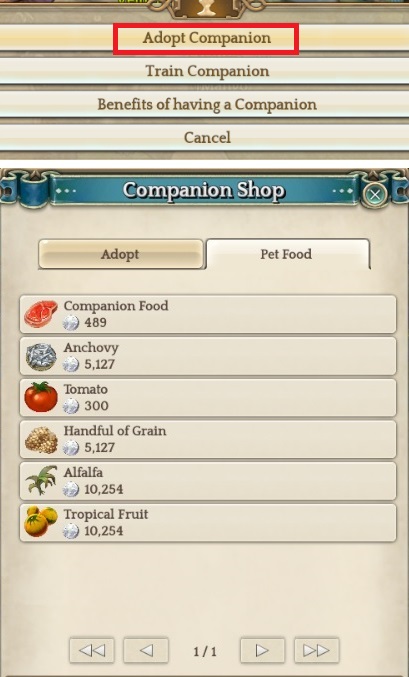 - Guinea Pig's food (Alfalfa) can be purchased via Companion Trader NPC in Klaipeda and Orsha.

- You can change the name of the companion by pressing a pencil icon in the Companion Info (f9).

- 9TP will be consumed when changing the companion's name.

- If you enter the current name or prohibited word, the name won't be changed.

- Enter '/come' and the companion will come to your location.

- Mount is a content-oriented means of transportation and can be mounted by using 'Summon Mount' skill of Common skill [F3].
▶ Corresponding skill does not appear when 1 or more Mount is not registered.

- Only one Mount can be summoned at a time, and there is no limit on the level to mount.
- 'Summon Mount' skill cannot be used while combat or jumping.

- Summoning the mount is canceled when the character is hit while summoning or when moving during summoning.

- For mount class, you can have effect that increases Movement Speed of Mount (+8) by using 'Summon Mount' skill when mounted on the companion. Other additional effect does not apply and the mounted companion does not change the appearance of the Mount.
▶Targeted Class: Cataphract, Templar, Lancer, Hackapell, Schwarzer Reiter, Sheriff

- Every skill cannot be used while summoning the Mount. (includes the Mount class)

- You can register Mount by using [Mount Voucher] and can Mount you have can be checked via Companion[F9].

- Every character in the team can use the registered Mount. 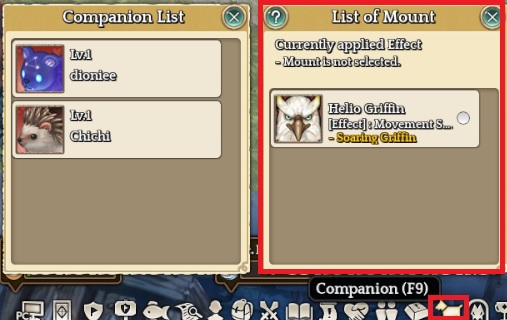 - Selected Mount in the [List of Mount] is summoned when using ‘Summon Mount’ skill. To change the Mount, summoned Mount needs to be canceled and re-summon the Mount.
※ When changing the Mount, 30 seconds of Cooldown is applied.

- You can cancel the summon by re-using the 'Summon Mount' skill to dismount from the Mount.
- When the character becomes incapable of combat or enters the Heroic Tale, the Mount will be canceled.

- You cannot use Mount in GTW.

- Mount can be received by clearing Achievement/Title.

※ Can be obtained once per team, [Mount Voucher] can only be transferred via Team Storage.

- Additional effects applied when using the Mount are as follows.