- Quest is proceeded by a specific storyline of TOS and is carried out missions from the NPC.

- You can see the quests from the [Quest information window] by pressing the [F5] key.

- Rewards such as equipment, silver, EXP, and EXP Card will be given when clearing the quests. 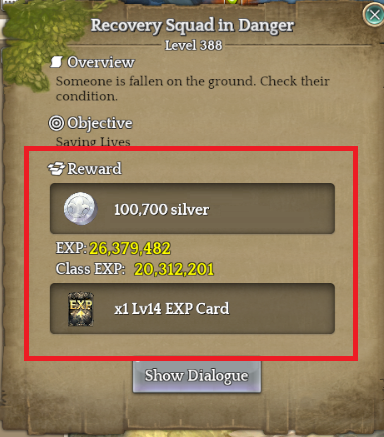 - You can receive a special reward via [Wings of Vaivora] NPC by clearing every quest in a specific storyline.

- [Main Quest] marked with the yellow flag is combined with each [Episode], a big group. A special reward can be received once per team when clearing every quest in the Episode.

- Moroth Embassy in Kingdom is a tutorial area where players can level up their character. This area can be played only when creating a new character. 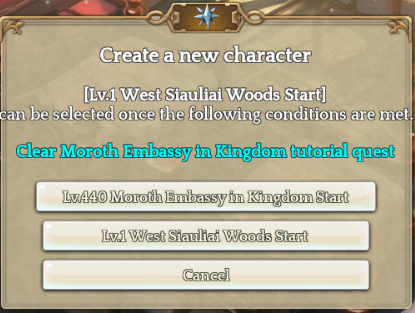 - Character with level 440 will be created when selecting the Moroth Embassy in Kingdom.

- You can receive reward for clearing achievement 'Start of the Adventure, Faster Growth' from Achievement [F4] UI by clearing [Revelator of Moroth(15)] in Moroth Embassy in Kingdom quest.

- If you use every Achievement Reward, you can start the Episode 13-1 with Lv.460 chararcter.

※ You can play the [Lv.1 West Siauliai Woods Start] that you can start from Lv.1 character, after completing the Moroth Embassy in Kindom Tutorial.

- Following functions cannot be used during the tutorial quest.

- Press [F5] and the Quest window will pop out. 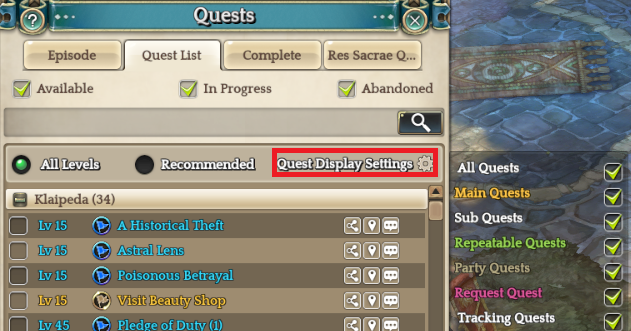 - Quest status can be checked by clicking the [Available], [In Progress], and [Abandoned] checkboxes.

- Search the quest you want to play by typing the name of the quest in the [Quest Search Window].

- You can see the quest that suits your level by selecting the [Recommende] section.

- Check the settings by clicking the [Quest Display Settings].

- [Quest Objectives] is on the right side of the screen. 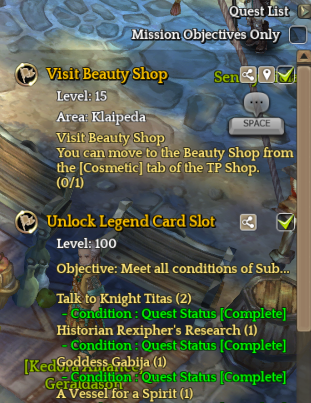 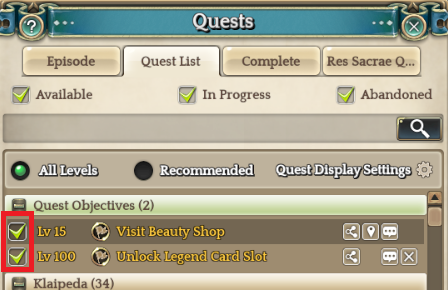 - You can register up to 5 quests in the Quest Objectives.

- You can remove the quest from Quest Objectives by clicking the check from the checkbox at the Quest window.

- You can see the details such as quest level, reward, and so by clicking on the quest. 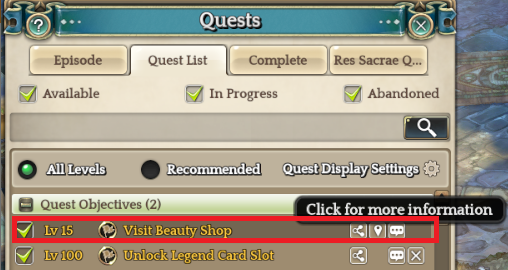 - You can see the quest area by clicking the [Check Quest Location] icon. 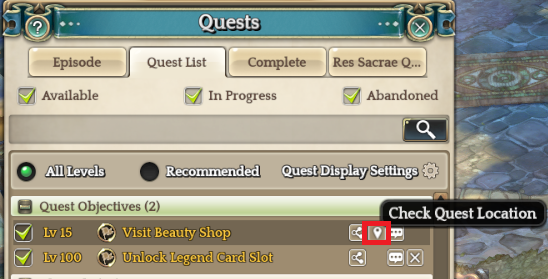 - You can see the lines of the quest NPC by clicking the speech bubble icon. 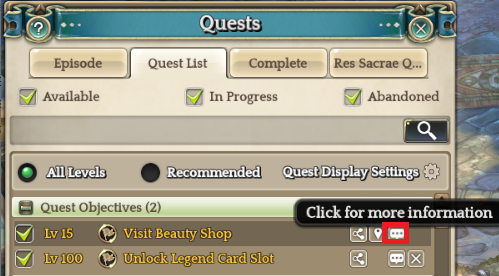 ※ You can give up or check the lines from the quests other than the quests in progress.

- Once you abandon the quest, it disappears from the Quest Objectives. 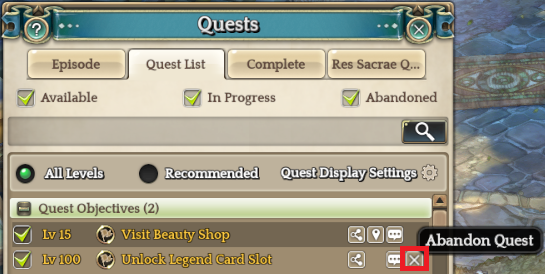 - You can restart the quest by clicking Abandon Quest, and then the Restart icon. 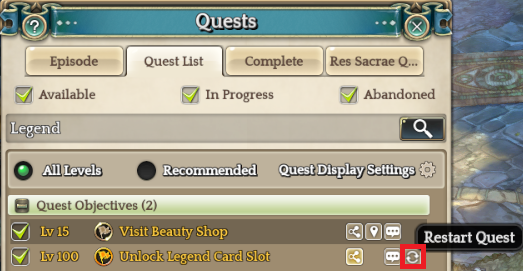 - You can see the quest that can be proceeded in the area by clicking the [M[ key. 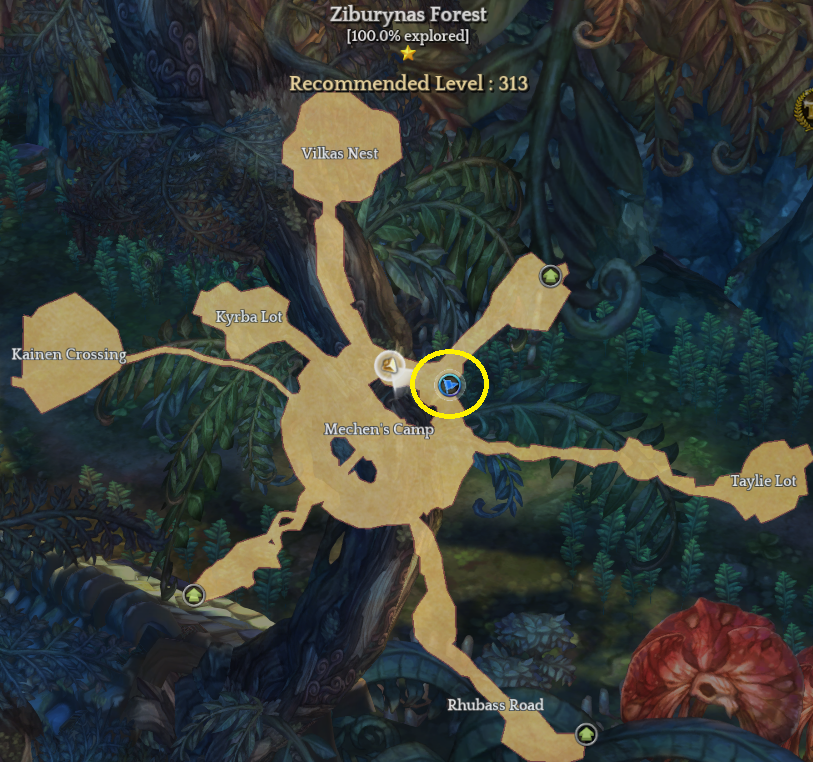 - Each quest can be checked by the appearance of the flags.

※ Quest Incomplete: Place where you receive a reward and complete the quest.

- Blue flag quest can proceed when one of the following conditions is met.

▶ Have a character who've cleared Episode 10

- You can teleport to the place where the Complete NPC is by the [←Backspace] key or by clicking on the icon on the Quest Objective.

- The main quests are combined into [Episode]. 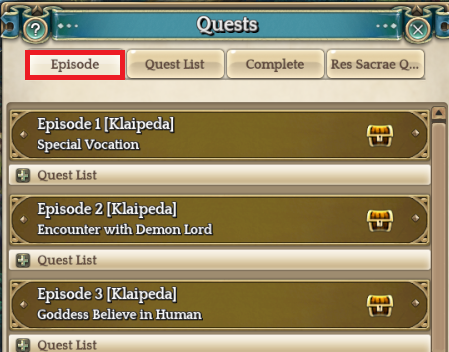 - You can see the Complete Reward and the quests in the Episode by clicking the [Episode], the first tab of the Quest window. 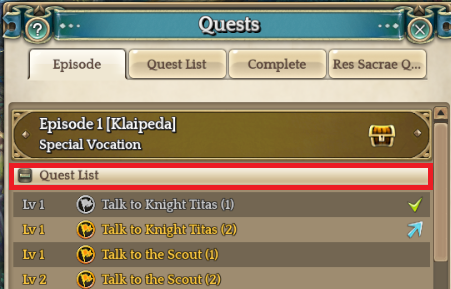 - You can see the list of quests in the Episode by clicking the [Quest List] below the Episode. 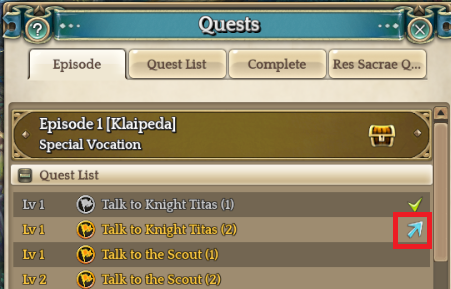 - Completed quest is checked, and the details about the quest will appear when you click the arrow on the right side of the ongoing quest. 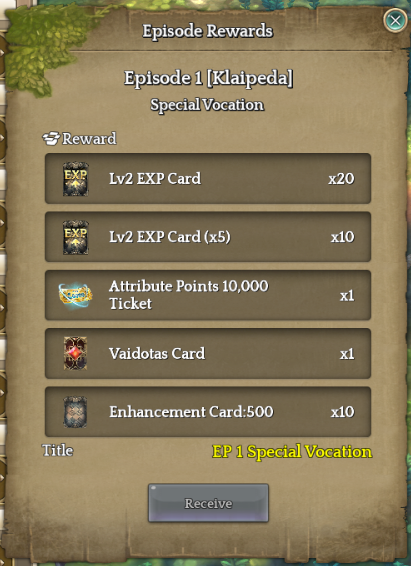 - Complete reward can be checked by clicking the Treasure Box icon(

) on the right side of the episode.

- Clear reward can be received only once per team, and the CLEAR mark will appear after you receive the reward.

Reward from Wings of Vaivora

- Additional reward can be received via [Wings of Vaivora] NPC in Klaipeda and Orsha by clearing a certain quest.

- Reward can be received once per character, and cannot be restored.

- Emergency Quest proceeds when defeating monsters in a certain area, and a reward is given when completing the quest.

- There are no daily limits on Emergency Quest.

- Emergency Quest ends (give up) when moving the map/channel, or selecting the character.

- Unable to do the Emergency Quest with the party.

- Class EXP is not given when completing the Emergency Quest.

- [Emergency Quest] starts when defeating a certain monster in the area. EXP of character and one of the following rewards will be given when reaching the goal.

- Following item can be received when clearing the Emergency Quest in the area.