As previously showcased in our dev blogs, the major contents available in TOS will be undergoing drastic changes with the implementation of the new class system. In this post, we would like to overview the compatibility issues and the solutions that we have come up with for issues that you may face with our [Re:Build] update.

All event dates and periods will be re-announced after the schedules for the [Re:Build] update have been confirmed.

1. Class Tree Change for All Players

- Available for all characters created before the date of the [Re:Build] update.

- Available for the given period from the time each character enters the game. 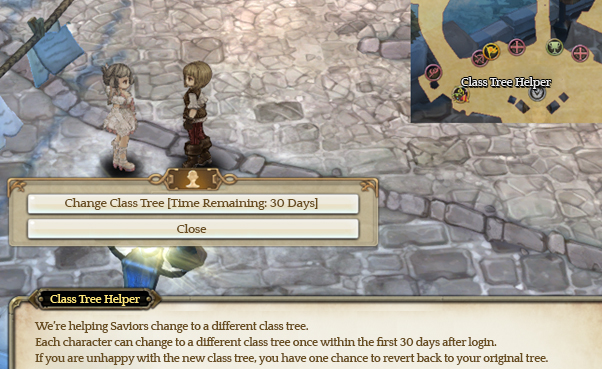 <Players can change their base class through the ’Class Tree Changer’ NPC.>

2. 3,000 Class Change Points for All Characters

- Available for all characters that have advanced in class at least once.

- All characters can receive 3,000 Class Change Points once per day for the given period starting from date of the [Re:Build] update.

- 3,000 points are issued automatically when the character enters the game during the event period (1 class change costs 1,000 points). 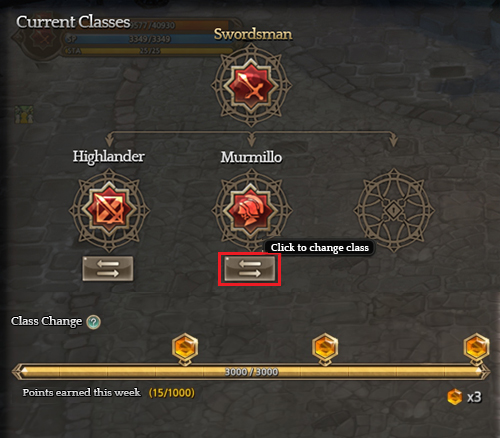 <Classes can be changed by clicking on the ‘Advancement Info’

button on the UI at the bottom-right corner of the screen.>

- All hidden class unlocks will be reset during the [Re:Build] update because of changes in the class tree composition.

- All players who have hidden classes unlocked are issued Unlock Voucher Selection Boxes corresponding to the number of hidden classes they have unlocked.

- Unlock Voucher Selection Boxes can be retrieved from eligible players’ Market Retrieve tabs following the maintenance for the [Re:Build] update.

- UPDATE: All eligible players will receive the same type of Unlock Voucher Selection Box (untradable, but transferrable via Team Storage).

- With the reduced cost of attributes, all players will be exempt from paying the fee (10%) for attribute point extraction.

- Extraction fee exemption is available once per character and is provided to all players for a given period starting from the date of the [Re:Build] update.

- This applies only to characters created before the update.

- On the date of the [Re:Build] update, all existing class costumes in your inventory are replaced with ‘Class Costume Vouchers’, that can be retrieved from your Market Retrieve tab.

- This will apply for all 101 Class Costumes that have been purchased using TP or Exchange Medals prior to the [Re:Build] update.

- Class Costume Vouchers can be traded for other class-exclusive costumes at the ‘Class Costume Trade’ tab of the TP Shop UI. 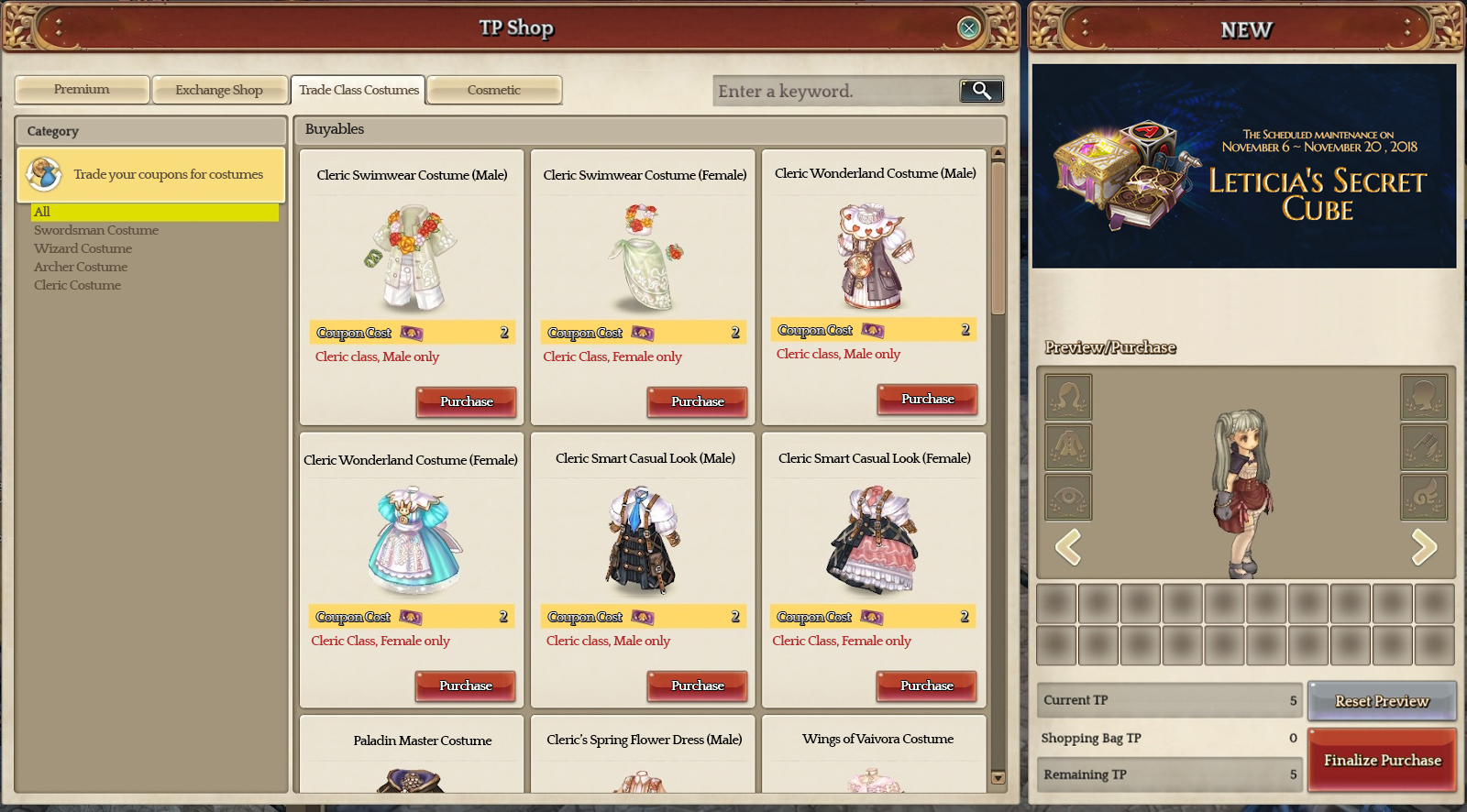 - The effects of the following three special costumes will be changed in accordance to deletion or change in skills.

- The following changes are applied during the maintenance for the [Re:Build] update:

- Due to the changes in gem effects, all gems (both colored and monster gems) are extracted from their equipment sockets without penalty and moved to your Market Retrieve tab during the maintenance for the [Re:Build] update.

- Players are able to transfer EXP from one gem to another without any loss through the ‘Benevolence of the Goddess’ event that will be open for a given period following the [Re:Build] update. 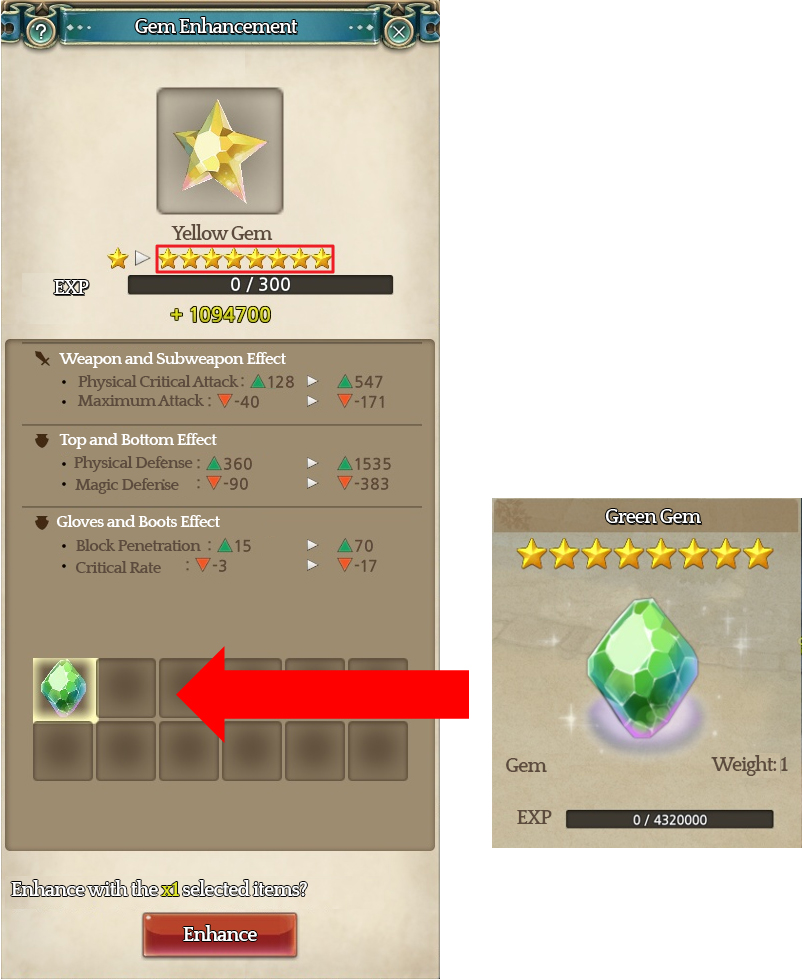 - In the case the players’ class tree has changed or skills have been deleted or transferred to a different class, the corresponding monster gem will be deleted and replaced with a ‘Monster Gem Selection Box: Class’.

- ‘Monster Gem Selection Box: Class’ items given to players as replacement will be retrievable from the Market Retrieve tab.

<Players can choose the monster gem corresponding to their class using the ‘Monster Gem Selection Box’.>

The following compensations are made in order to solve the compatibility issues that may arise with the class tree changes in the [Re:Build] update:

1) All weapons with 0 potential have their potential increased by +1.

2) All market fees for weapons, armor and accessories are refunded.

- Available for a given period from the date of the [Re:Build] update.
- This applies to all weapons, armor and accessories traded over the Market during the event period.
- All market fees consumed during this period are refunded during the scheduled maintenance of the week after the event period is over.
- Caution:
All market fees (10% of item price) are refunded regardless of Token use state.
The terms are only applied to items finalized in sale before a date to be announced.
Does not apply to items other than weapons, armor and accessories.

UPDATE: This measure will be replaced with a different event, to announced closer to the day of the update.

3) Events every week for either discount in item enhancement/transcendence/re-identification or looting chance +200%.

Unique Raid Weapons
- Stats of items from before the update are not maintained. They will be replaced with new item stats.
- Due to potential and maximum socket adjustments, items may be different before and after the update.

7) Appearance items obtained through TP purchase will be returned.

- Weapons under appearance item effects will be returned to their basic appearance during the scheduled maintenance for the [Re:Build] update.
- The appearance item used on the weapon will be returned to your Market Retrieve tab.
- If you have used a Weapon Appearance Material from the TP shop to change weapon appearance and want to have the Weapon Appearance Material item returned, please make a request by sending us an inquiry ticket. We will only process the tickets received within the first two weeks of the [Re:Build] update in the following format:

The above measures have been planned through careful consideration to minimize the distress that players may experience with the drastic changes that the game is undergoing. At this stage, all plans for dealing with compatibility issues are subject to further changes with the actual implementation of the [Re:Build] update and we promise to keep our ears open to the feedback from the community with the implementation of the [Re:Build] update and to always strive to make progress wherever possible.