As we mentioned in the last post, we are going to talk about the contents in this posting.

Tremendous Kruvina Walls appeared in the Paupys Crossing after the Beholder’s army invaded Orsha. The wall is covering the road to the Ashaq Underground Prison just like hiding a secret behind the back.

Saviors headed to the Ashaq Underground Prison with the hero Pajauta, who has been led by fate.

And, you face the terrible brutality in there that the beholder has committed to humans.

Along with Pajauta's precious fate she met here, saviors should follow the traces of the royal officials of the kingdom that were kidnapped in the past.

Demon Lord Back from the Death

This is the normally unknown Secret Space of Ashaq Underground Prison.

Its past use is unknown, but the Ashaq Underground Prison Containment Area is now being used as a containment station to control Beholder’s subjects.

The powerful Demon Lord who once followed Giltine is back from death through the merciless experiment of the Beholder and threatens the saviors.

The Beholder throw saviors off the chase but leads the saviors.

Episode 13-2 is a scenario quest that can be carried out with Episode 13, and can be progressed simultaneously from level 450 regardless of area’s level.

Saint's Sacellum is the first main content of Goddess Raid that combat with Vasilisa to obtain materials for Goddess equipment crafting and enhancement.

Saint’s Sacellum has Normal (Auto Match) and Hard (Party) just like Demonic Sanctuary, and Entry Voucher, which can be obtained in Normal mode is needed to enter Hard mode.

Normal Raid has an entry limit per character, but Goddess rank equipment is needed as entry condition.

Since this is the beginning of transition to the Goddess, we decided to change the existing Legend to Goddess.

If the next level of Goddess Raid comes out in the future, you can proceed with the Goddess equipment that will be updated this time.

Vasilisa Scale, obtained from the raid, is the main material of this equipment. It is used commonly in crafting, Enhancement, Awakening, etc, and can be traded via market.

In Normal raid, 2 times of entry limit is given per character and additional entry voucher can be purchased via Mercenary Badge Shop.

Because the Mercenary Badge is the team's property, you can play it with the character you want.

The cost of the Entry Voucher increases per purchase.

You can play Hard raid by using Voucher Recipe obtained via Normal raid.

Because this Voucher can be traded via market, you can sell it and obtain silver if you cannot play with a party, and you can play it with the character you want since it can be moved to the Team Storage.

Title will be given when you clear the Hard raid, and more Vasilisa Scale and additional items can be obtained.

Unknown Sanctuary is a new content like Sole Hunt where you can obtain material for a new equipment system and main materials.

Monsters at Unknown Sanctuary are enhanced by the Curse of Sanctuary, so it can’t be defeated by normal attacks like it does to the normal field monsters.

Grace of Sanctuary is needed to nullify the Curse of Sanctuary and hunt the monster, and this effect can be applied for a certain amount of time by using silver via the  Entrance NPC. 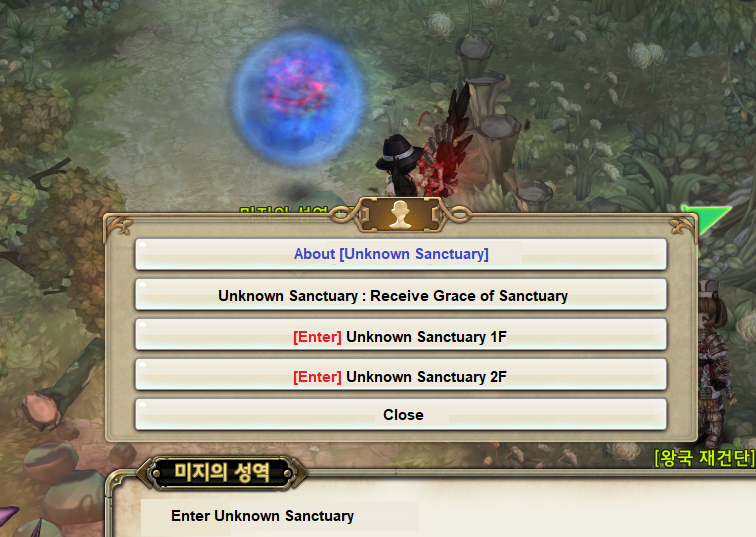 Entrance NPC of Unknown Sanctuary is in Kirtimas Forest and you can have Grace of Sanctuary that lasts for 1 hour by purchasing 1,000,000 silver.

Entrance NPC installed in the town by the guild is lasted until the next Guild Territory War. Every user including the guild member can have the cost of Grace of Sanctuary decreased by 50% and can actually enter. The profits will be given to the corresponding Guild.

Unknown Sanctuary consists of the 1st floor and 2nd floor with powerful monsters.

1st floor is a normal monster area that can be played only solo, 2nd floor can also be played solo, but party play may be more suitable since there are boss monsters.

In Unknown Sanctuary, you can obtain silver when defeating monsters and consumables to upgrade Goddess equipment such as Goddess Enhance Supplement, Lv 460 Awakening Stone, Magnifier, etc can be obtained by chance.

Also, Vaivora Vision is dropped with a higher chance than the normal field.

If you get lucky, the main consumables needed for the Evolve System which is applied from this Goddess equipment, can be obtained.

Every seasonal consumable obtained from the Sole Hunt can be traded in the Market.

[Heroic Stage] is a non-specification casual content, which is processed by clearing stage. You can purchase entry voucher from Mercenary Badge Shop and enter via Contents Status Board(F10)- Dungeon tab. 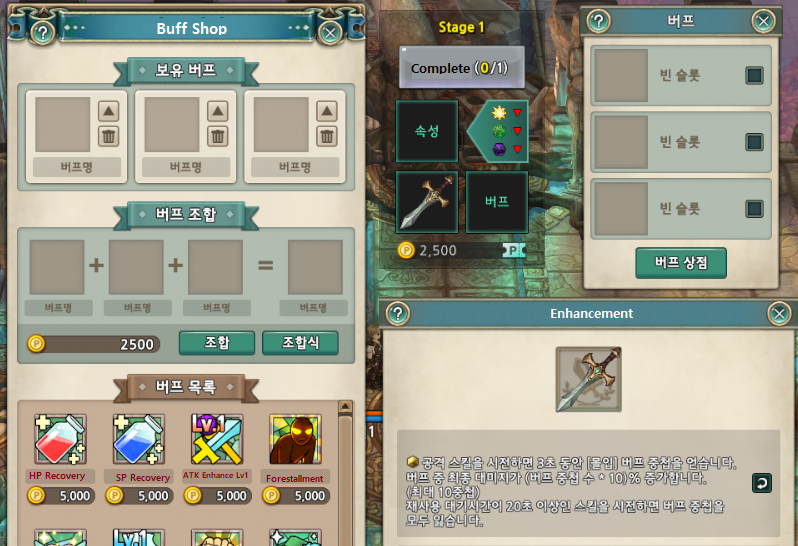 In the Heroic Stage, existing property, type, Armor type is not affected and you can choose the property that will be applied in the contents.

Points obtained by playing the contents can be used for upgrading the equipment, or purchasing buff at Buff shop and upgrade.

Aslo, buffs can be crafted into more powerful, higher buffs.

From time to time, saviors will challenge the stage in an advantageous position.

You can receive Token of the Goddess (Gabija), Unidentified Mystic Tome, Attribute Points, etc as clear reward, and special items can be received for weekly ranking reward which will be added in the future.

Challenge Mode will be adjusted.

Challenge Mode (excludes Division Singularity) will be changed from monsters created in a certain range of the character to finding monsters in a new map every day and defeating them.

Monsters will be created according to the number of party members, an average of level, etc, and individual/party buff will not be given.

Reward also changes. Silver obtained when clearing the Challenge Mode decreases, and will be substituted with Token of the Goddess (Gabija) (Division Singularity included) .

Other than that, the drop of Vaivora Vision that can be expected when defeating Elite Monsters, Nucle Powder and Sierra Powder are the same as it is now.

Field Challenge is not processed with only Solo (+ Assister).  Resources such as Silver and Vaivora won’t be obtained but Mercenary Badge and High EXP will be given.

New contents Bounty Hunt will be started when you use this Written Order item to the Wanted Board at each town. 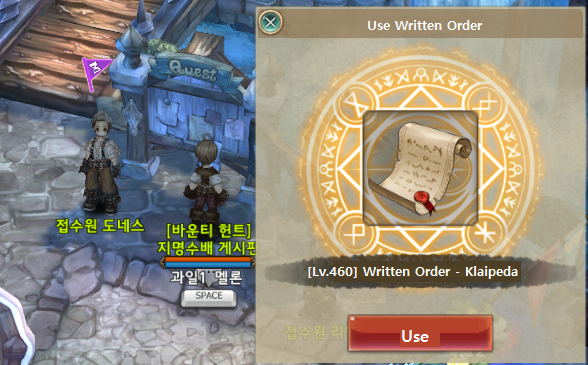 Bounty Hunt is a Solo play and the goal is to complete the mission by starting from the town and reaching another randomly selected area within the time limit.

During the Bounty Hunt, every quick-moving function (Token move, Contents Status Board, Portal Shop, Warp Scroll, etc) cannot be used and must move to the point by yourself.

When moving the field, the wanted monsters also block the way.

You cannot move to the next area during the combat, so you need to defeat them quickly.

When you reach the target area, you will encounter a special boss monster that only appears in Bounty Hunt.

When you succeed in defeating the boss monster, the Bounty Hunt ends and you can receive the reward.

Remnants of Bernice Dungeon will be reorganized with a new progression. 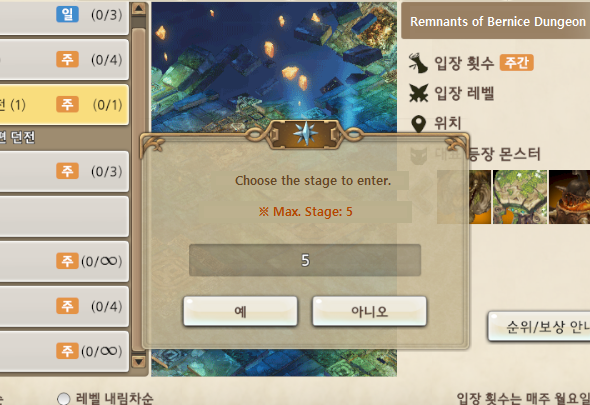 The highest stage does not reset and you can try on up to 6 more stages from your highest stage. The stage continues up to 3 minutes and monsters appear multiple times and when you defeat every monster before the next creation time, the next monster will be created immediately.

The ranking of the succeeded stage will be recorded as the following criteria.

The previous ranking will be reset as the procedure is changed. 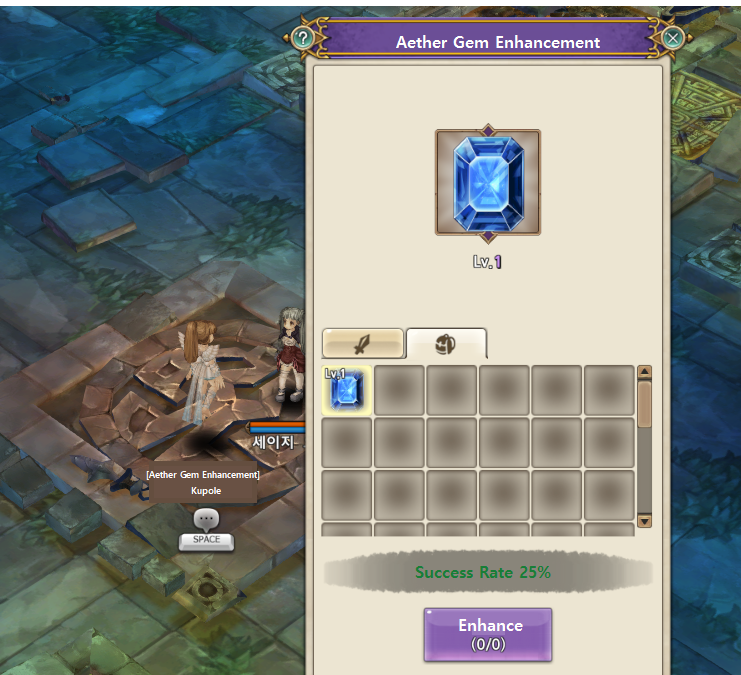 You can enhance the Aether Gem via Kupole NPC appearing when clearing the Remnants of Bernice Dungeon with no cost and you can try 3~5 times per time.

Chance to succeed the enhancement increases when clearing higher stages compared to the Aether Gem. Additional Entry Voucher for Remnants of Bernice Dungeon can be purchased in Mercenary Badge Shop.

Collect the Aether Gem Fragments obtained from Bounty Hunt and use it to obtain an Aether Gem.

Fragments can be traded in the market, but the Gem is bounded as a team.

Aether Gem can be equipped 1 per equipment, and Aether Gem Socket Key and Golden Socket, Arch Stone Fragment is needed as a material. 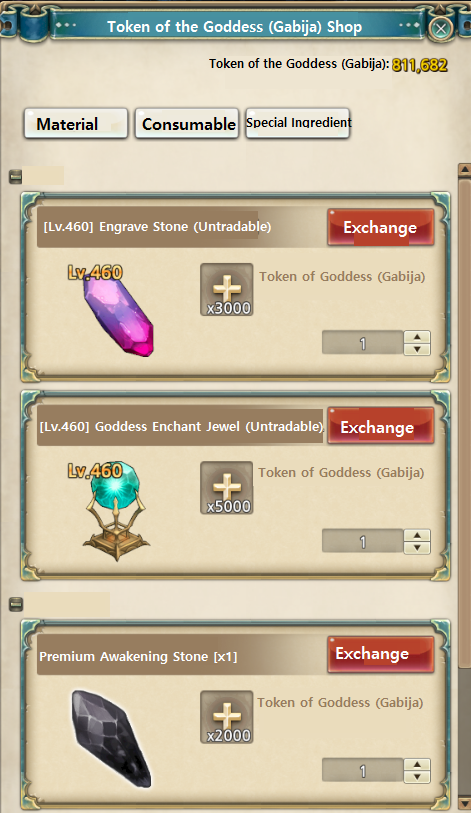 Token of the Goddess (Gabija), which can be obtained from various contents, is the main consumable for this season (Vasilisa). You can purchase various items that can upgrade the Vasilisa equipment.

When the new level’s equipment is updated in the future, the new Token of the Goddess and item shop will open. Previous season off shop can be used with lower cost.

As turning into the Goddess Equipment system, Unique Raid, Unique Raid: Solo where you can obtain Fixed Stat Ichor will be deleted.

Contents above will be removed from the Contents Status Board and the Raid area will remain as the quest area.

Fixed Ichor (Extracted from Unique equipment) which cannot be used to Goddess, cannot be obtained anymore, and remaining soul stone can be exchanged to Mercenary Badge by right-clicking.

Following items can be purchased via Mercenary Badge Shop.

* Skiaclipse Varna weapon, Glacia Legenda weapon which can be obtained via Legend raid will be changed so that the appearance of the weapon can be changed.

TP Shop is changed as follows.

Because it may be confusing due to the system change, the Leticia’s Secret Cube on the corresponding month won’t be on sale. Please be noted.

Squire’s Refreshment will be changed to be able to be installed independently regardless of the location of the base camp (including extension of the period), and it also can be installed in towns.

3 Legend rank items from the Goddess Grace Offering are changed.

Newly added item, Gabija’s Authority (Working title) is a collection item that can only be obtained via Goddess Grace.

When you collect all 3 Gabija’s Authority items and complete the collection, stat applied to all characters in the team increases.

Collection items can be traded at the market.

Gabija’s Authority can be obtained from Goddess Grace, but after the season, it will be added to the Season Off Shop after the season so that anyone can purchase it with a reasonable price. (10,000 Token of the Goddess (Gabija) each).

Besides that, the items of the Goddess Grace will be updated according to the new system.

This concludes the NEXT Project #2 : New / Adjusted Contents and System.

The next post will be NEXT Project #3 : Adjustment for Team Battle League & PVP, and Afterward updates.

※ The system, item name, value in this post may be added, changed, or removed during the actual updates.

Summary of Contents and Rewards