We have announced the Goddess System, which is helpful to make an environment to grow various characters via Brief Plans for 2021 Update posting in May.

The Goddess System includes changes in equipment items and management system, and updates about related contents.

Lv.460 Goddess Equipment is stronger than the Lv.440 Legend Equipment by 30% based on the final 10 TRA. Type of the equipment is 1 set, and damage increase/decrease stat like Legenda - Retribution and Dysnai - Field does not exist but the Attack and Defense is highly set.

When the Subweapon is not a shield, 30% of the value (basic, TRA, Enhance) is applied according to the Attack calculation without attribute or buff. Attribute or buff that brings Attack of existing Subweapon is removed, but some attributes of class with shield attack skill (Shield Attack of Swordsman class, Shield Mastery of Quarrel Shooter) remains.

The value of One-handed weapon and Subweapon is equal. Subweapon of classes other than the Scout are Dagger and Shield, Scout class uses Dagger/Pistol as main weapon and One-handed Dagger as Subweapon.

Assuming that the Attack increased by Enhance is +3000, the values are as follows.

Also, the maximum number of Random Stat and value for One-handed Weapon, Two-handed Weapon, Subweapon, and Weapon Accessory is unified. You can choose every class type with random stat remaining when using the Weapon Type Change Tome for Goddess, and the cost is 20.

Value of the Armor is as follows.

Armor’s basic value also has 2 times more than the Lv.440 Legend, performance of 10 TRA is 30% increased than the Lv.440 10 TRA and has 30% higher value. Until now, the Defense rate of Shoes and Gloves were lower than the Top/Bottom, but from the Goddess Equipment, all 4 parts will have equal value (Enhance included). Defense of the Shield is set with equal value with the Attack of Subweapon.

As well as the weapon, Goddess’ Blessed Gem x20 per piece are needed to increase up to 10 TRA. Other rules are equal to the weapon.

Dual Weapon System that equips 2 pairs of weapons consists of Main Slot and Sub Slot, and is only supplied to the Goddess Equipment.

- Equipment of every rank can be equipped in the Main Slot.

- Only Goddess Equipment can be equipped to the Sub Slot when Goddess equipment is in the Main Slot.

The standard Dual Weapon System is applied only with 2 pairs of Goddess Equipment. You cannot use 2 pairs of Legend (or below) equipment like before because you cannot use Sub Slot when weapons other than the Goddess rank are equipped to the Main Slot.

The performance of equipment is equal as before when only one set is equipped, and when 2 sets are applied, Attack, Defense is applied as average, class’ attribute is applied as 50% per set.

When 2 sets are equally equipped like the B, the Attack is equal to one set (A). Instead, the Fixed and Random Stat and Enchant, Awakening, or other stats in the 2nd weapon set are added.

Enchant is applied to a total of 8 slots and cannot be applied duplicately.

When equipping 1 Shield in 2 sets like C, the Attack decreases and the Defense increases by 50% than that of the Shield.

When equipping 2 shields like D, the Attack is applied as equipping only Main Weapon, and the Defense of the Shield becomes 50%+50%=100% which is equal to equipping one set of Main Weapon + Shield.

Attribute is applied by 50% each when equipped

When two attributes are learned, and different weapons are equipped, the Critical Rate increases by 15%, and Critical Damage increases by 50%. Also, when using the skill that needs a specific class’ weapon, the corresponding skill will be casted even when one is equipped in any of the two slots.

From this update, changing equipment during combat becomes unavailable. 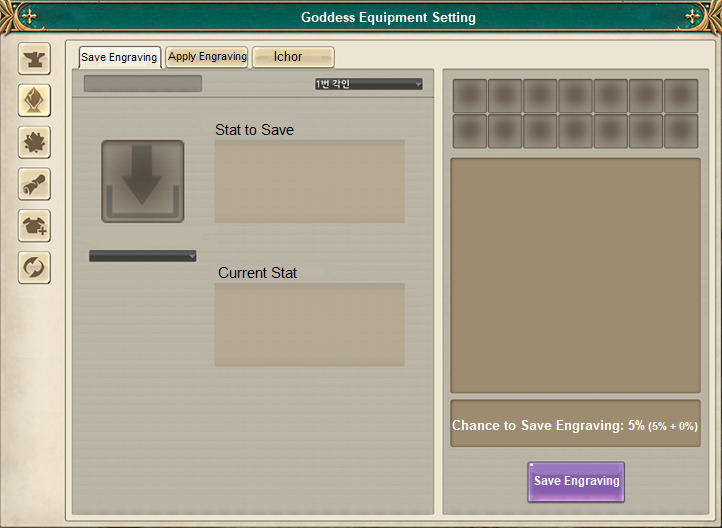 You can manage Goddess Equipment Crafting and Upgrade by the unified UI. You can craft, Enhance, Transcendence, Enchant, and apply stats here.

But the Awakening proceeded by the user’s skill will be as usual.

Goddess Equipment basically has a continuous structure by using the previous generation’s equipment as a material. Because this Goddess Equipment is the first generation, it is inherited from Lv.440 Legend Equipment which is final equipment currently. This system isn’t an event for the Legend equipment but a regular system which will be continued from now on.

Requirement for Inheritance is Lv.440 Legend with 8 or above TRA. If it meets the 8 or above TRA, every equipment from crafting, event, purchase can be inherited to Goddess.

Goddess Equipment is character-based when equipped. Thus, before deciding the character to equip, you can put it in the Team Storage.

Goddess equipment can be enhanced by using Gabija’s Coin, Vasilisa Scale (Working title) (Main reward for Goddess Raid), and Enhancement Supplement. Gabija’s Coin is a seasonal coin that will be used as silver to the system related to this season’s equipment, and can be obtained from main contents like challenge mode.

Success Rate for each stage of Goddess Equipment Enhancement is as follows.

Enhancement will be 100% done until 5 ENH, decreases the chance afterwards and fixed to 1% from ENH 19 or above.

Actual Attack and Defense rate according to the Enhancement value are as above.

It is set as 30% higher than the Lv.440 Legend equipment with the same Enhancement. (Increases Attack by about 4000 for 20 ENH weapon)

You can increase the success rate of Goddess equipment by using Enhancement Supplement.

For Goddess equipment, the Enhancement value does not decrease when failing the enhancement. Also, after failing, the chance to succeed in enhancement increases by a certain chance.

Failing Adjustment Value is 10% of the chance (Supplement included) before the trial, accumulates the value until success and adds to the final success rate. (+%p)

Goddess equipment can be equipped up to 8, but set stat is still calculated as 6 pieces. Slot ‘2’ of Dual weapon system does not check the Set stat. 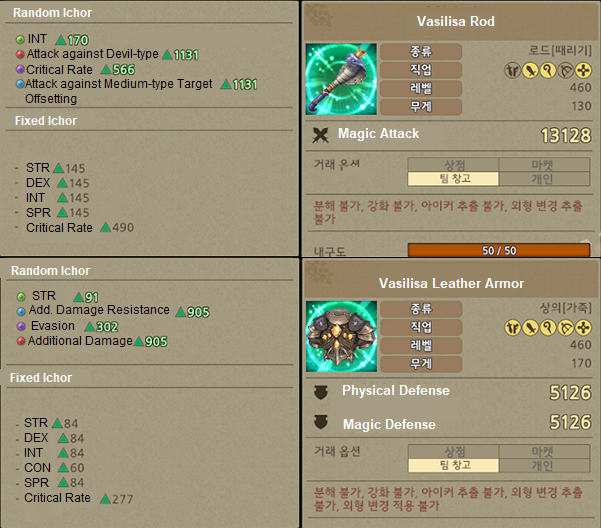 The Random Stat is applied fundamentally like Savinose equipment, you can check on the stat via Identification when crafting for the first time. Random Stats from the Lv.460 Goddess equipment are as follows.

will be provided in game. 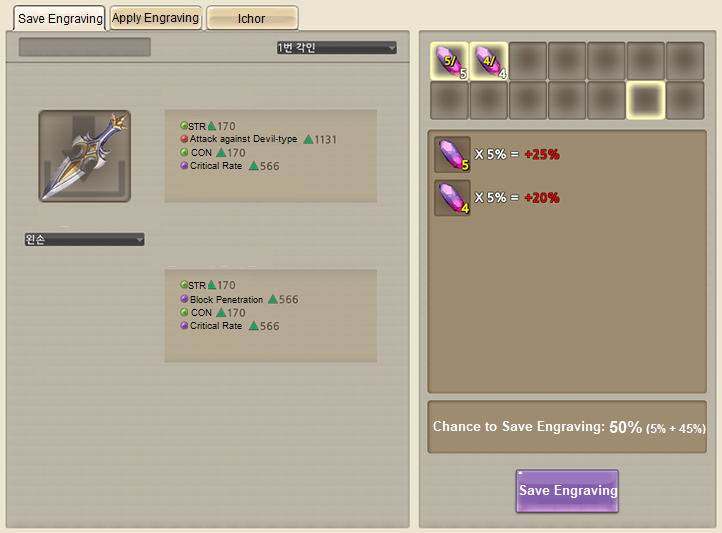 If one character wants to use various kinds of Random Stat, you can save the stat with the Engrave System and use it whenever you want.

When you use  Lv 460 Engrave Stone to the equipment you want to extract Ichor, it’ll try Engraving by certain chance and will be saved to the slot when succeeding.

Engrave chance is  5% + 5% per 1 Engrave Stone (necessary), maximum by 100%. Lv 460 Engrave Stone can be obtained from contents or purchased via Gabija’s Coin Shop. 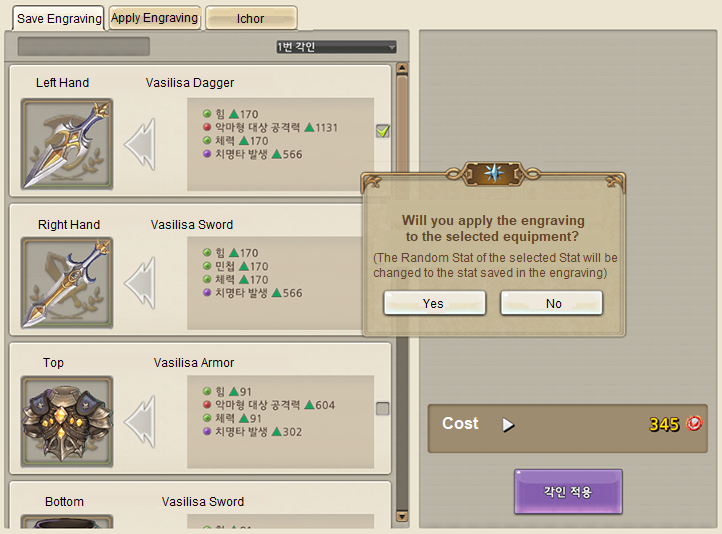 One character can have 2 Engraving Slot per parts, will be added in Achievement or reward of contents.

Vaivora weapon is no longer an equipment but is changed to a form of ‘Vision’. 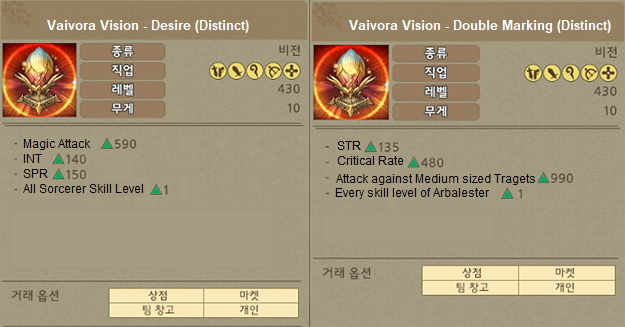 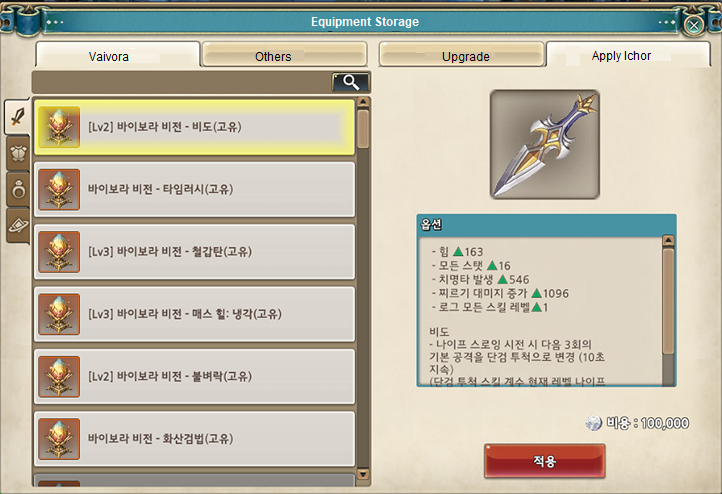 Vaivora Vision registered to the storage can be leveled up like the former Vaivora weapon or Ichor and the costs are as follows. 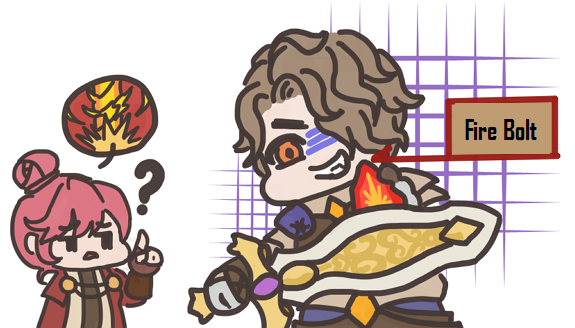 Vaicora Vision does not vary between types, which means Vaivora stat can be applied to any weapon you wish.

Chaplin can now use Sacred Armor with a two-handed blunt, or Cataphract can use Matchless with a one-handed spear and shield. If a healer that gave up on Defense equips Mass Heal: Freeze on the Two-handed blunt, the skill effect of the assisting skills could increase based on higher ATK. Of course, enhanced stats for specific skills are meaningful only if you have them.

If you wish to only add the stats except the skill effect, you can add Fire Bolt to the two-handed sword.

You can put the armor fixed ichor of Unique equipment or ichor of Lv.430 or higher in the storage. Applicable items are as follows.

You can level up the Demon God/Goddess type after registering in storage, just like Vaivora, and the required items are as follows:

You can equip 2 color gems in the weapon and 2 skill gems. You can equip skill gems in any parts of the armor. Additional gem sockets of Goddess equipment can be added in the common UI and consume Gabija's Coin instead of silver. Also, it no longer requires any cost when extracting gems. (This is applied to items of all grades.)

1 Socket for the new Aether Gem can be opened in the weapon. Golden Socket and Arch Stone Fragment is required to open an Aether Gem Socket, and you can obtain the Aether Gem from the new Hunting Grounds. 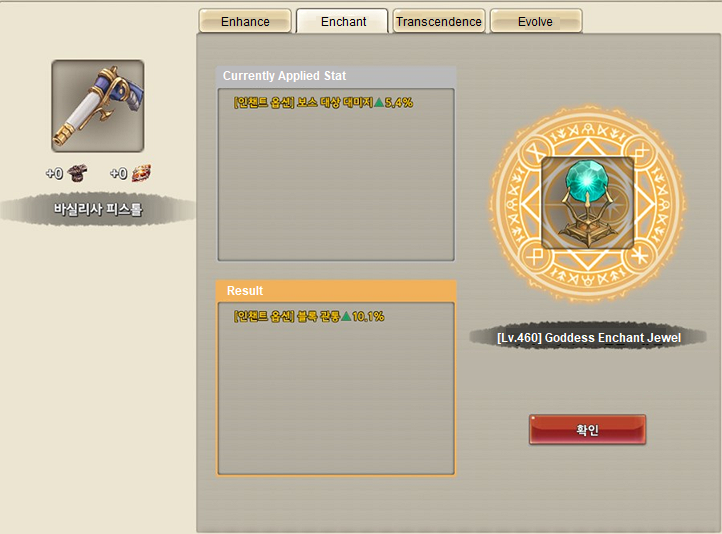 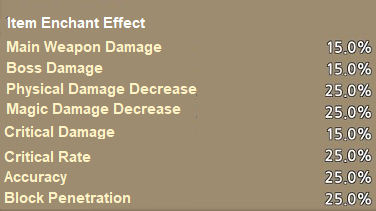 By using 8 slots in total by Dual Weapon system, you can activate 8 kinds of enchant stats. The same stats do not overlap and only higher values apply.

Awakening stat applied when using Lv 460 Awakening Abrasive are as follows. (Value is applied randomly by an equal chance)

You cannot transfer Awakening stats from Legend to Goddess. However, if the weapon type is the same (Pistol to Pistol) you can transfer between the Goddess equipment. 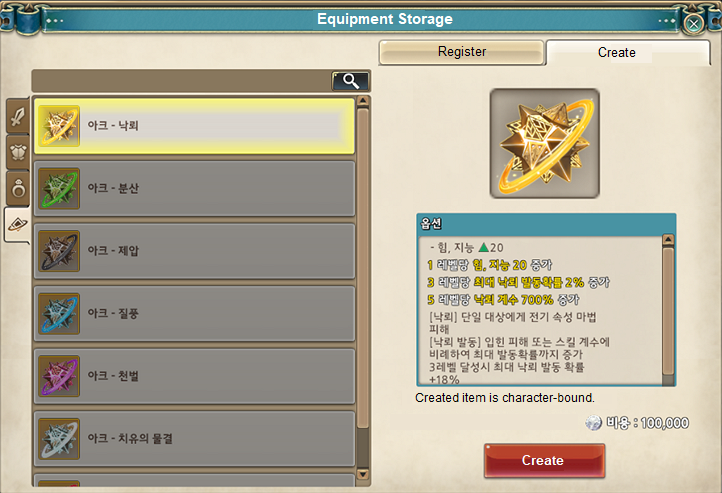 You can store 7 kinds of Ark (Swift, Thunder, Storm, Disperse, Divine Retribution, Suppress, Healing Wave) in the Ark Storage. By consuming items and opening the kind of Ark you wish, each character creates character-bound Ark via storage. When created the level will be set to 1 and the items required to open and level up are as follows.

Stats of some Arks can be adjusted during the update. 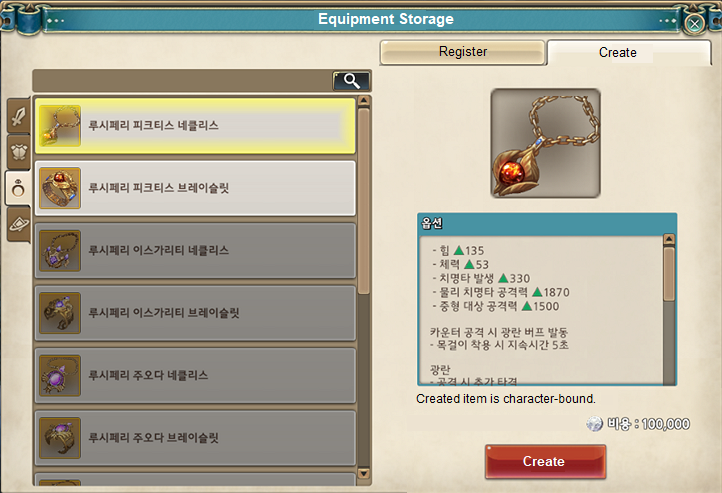 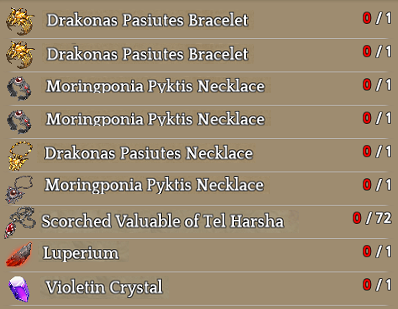 The existing accessories can be dismantled as follows.

Lower rank Legend Accessory per stat type are as follows. 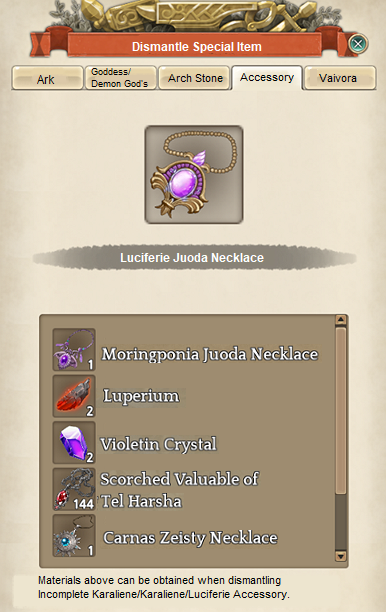 However, you must extract Luciferie property in order to dismantle. 2 sets of scrolls with current enhancement stat and potential will be given when extracting property. 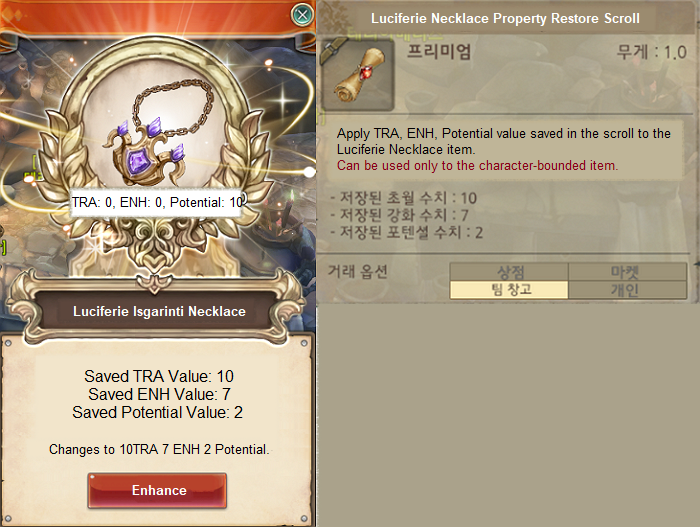 Accessory works with the current anvil enhancement system instead of the Goddess enhancement as it is still Legend grade. Also it has no limit difference in playing content from bound Luciferie when used without storage. Goddess accessories are planned to be updated in the future.

The cost of Mystic Tome required in Enhanced Upgrade Arts, which also takes a big part in character building, will be lowered to ¼ of the current cost.

Gear Score, system that sets score based on the weapon, armor, accessory, seal, and Ark is added. Gear Score is based on the level and grade of the equipment and set according to the additionally processed status. This will replace the current entry limit system which requires ‘** grade *TRA *ENH or above’ to enter.

Gear Score is calculated by the average of each part’s values, and will be used as an entry limit of various contents.

The following balance adjustments will take place with the Goddess equipment:

Additional Damage will be organized. Because the additional damage that works as a damage that ignores defense is affected heavily by number of hits and low value balance, it will be based on the following standards.

Additional damage attributes will be added to Quarrel Shooter, Chaplain, and Schwarzer Reiter. We’ve selected the most basic DPS class out of the ADD to be changed for the first time and other skill DPS that have a high number of hits against a single target are also considered to be changed. If there are two or more ADD in one class, the effect will not be stacked.

Expansion and Management of Maximum Damage

As the ATK, factor, and damage increase stat becomes higher and higher, the number of attacks that is limited to the current maximum damage of 10,000,000. Therefore, following adjustment will take place:

Factors with high value will be broken up

Maximum damage is expanded from 10 million to 40 million and skills that give a single hit damage over 20,000% will have its factor broken up by adjusting consecutive hits, overheat, or cooldown to evade reaching the maximum damage. Attacks activated by items and attack of the summons are also included.

As the new equipment is updated, the defense of the monsters in the current competitive system will be adjusted to receive a similar damage. New or newly adjusted contents in the future will also be made to keep pace with the Goddess equipment.

This concludes the NEXT Project #1 : Goddess Equipment Systems.

The next post will be NEXT Project #2 : New / Adjusted contents and system.

※ The system, item name, value in this post may be added, changed, or removed during the actual updates.