TOS dev team here. Today, in part 4 of our Dossier series about the ‘Plans for Combat System Changes’, we’re talking about what differences you can expect in items and hunting fields.

1. What will change about the stats of equipment items?

First, here’s the chart showing how level, stats and weapons influence skill attack before and after the changes, in case you missed it. 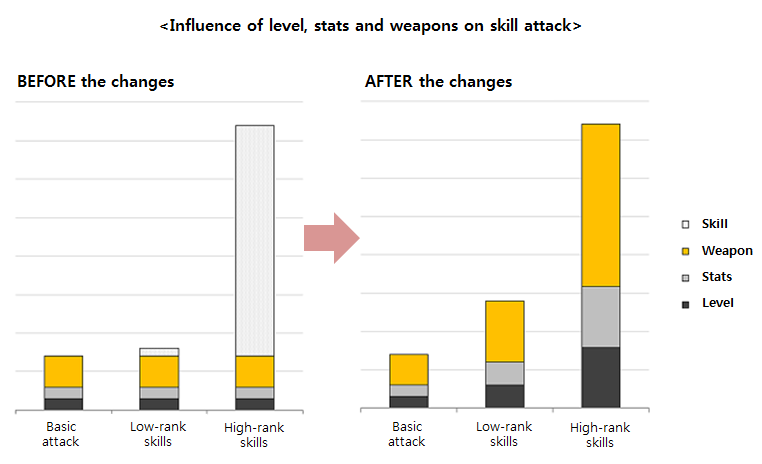 You can see from this chart that the importance of items increases by quite a bit after the changes. Now have another look at the new damage calculation formula:

Your attack is going to depend on the defense of your enemy, and on your own attack-defense proportions. A character with attack 100 and defense 100, for example, deals 30 of damage (70% reduction); one with attack 200 and defense 100 will, in turn, deal 90 of damage, suffering a damage reduction of only 55%. This means that larger gaps between your attack and defense values will be more advantageous. Thinking of the two example characters above, the difference between 100 and 200 is only 2 times, but the actual damage (from 30 to 90) is 3 times different.

< Regular attack damage according to attack and defense values >

Your attack is composed of the following criteria:

Note that additional property damage isn’t counted in these criteria. 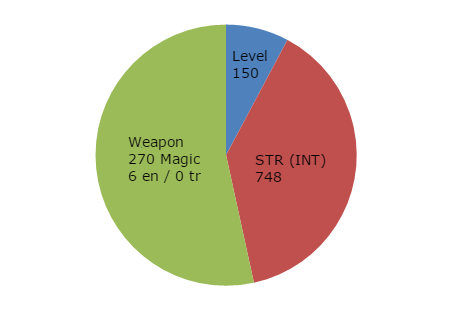 If you consider that you can increase your attack by about 1000 through your level and STR/INT stats, the total percentage occupied by the attack of your weapon is more than 50%, reaching up to more than 70% when enhancement/transcendence/gem values are applied. This percentage can increase even more if you choose to invest in stats other than STR or INT.

Skills, on the other hand, take into account the defense of your target to increase your attack only by a certain percentage, so they won’t have much effect on already-low attack values. This is especially true with high-defense enemies, which are unlikely to be visibly affected by even high attack factor skills.

On the other hand, increasing your defense up to a higher degree can significantly improve how well you withstand regular attacks, and even skills with an attack factor of 1500% won’t make that much of a scratch.

Along with the combat system changes, we’re also going to reduce the overall defense in monsters, so we expect it will be easier for players to deal decent amounts of damage not only in fields but in instanced dungeons and Earth Tower as well. After the changes, however, we do want to introduce new item-dropping field bosses with higher defense and attack, so having a certain amount of defense will continue to be important to players.

2. How will the dual stats of armor and blunt weapon items work? 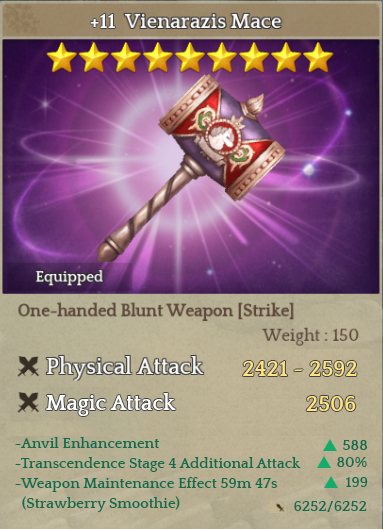 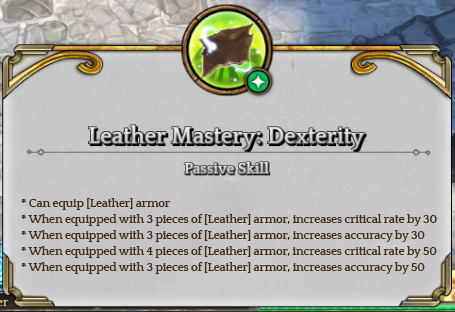 3. How will item enhancement be affected by the changes?

After the combat system changes, the biggest difference you can expect in terms of items is in the enhancement function, which many players currently feel doesn’t offer enough of a boost to justify its silver prices. To improve on this, we changed the price for each stage of enhancement, making it 20% to 30% lower than the current fees, and increased the efficacy of each increment.

Starting from +6, the first stage at which the enhancement can fail, the increment increases, as it does every 5th stage after that (+11, +16, +21, and so on). Matching the enhancement of your item to these stages, then, becomes the most efficient option.

We are also changing the maximum stage of “safe” enhancement of sub-weapons to +5, but other than that, the chances of success, potential consumption rules and anvil functions remain the same. One related difference in the field of transcendence, however, is that consuming the potential of an item will not affect the amount of Blessed Gems required in extraction penalties, so that will be one less thing for you to worry about.

4. What is going to change in the transcendence system? 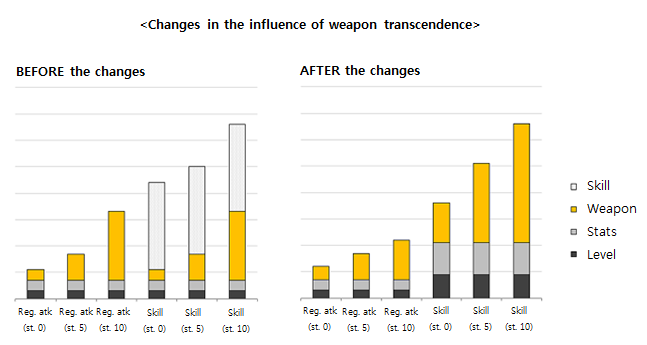 The overall percentage of increase you get from each stage of transcendence is going to be smaller, but with the new combat system formulas and skill factor calculations, the performance of transcendence in items is going to remain very much the same, and can even prove itself to be much more powerful than before depending on your skill combinations. One thing to keep in mind, however, is that after the changes, the higher the transcendence stage of an item, the pricier it will be to enhance it.

Here’s a sample case to help exemplify this rule:

In the case above, the player saved a total of 8 Blessed Gems (all the Gems they used in successful attempts), so if they were to extract them, they should receive back 8 x 90% = 7.2 (rounded). That’s a total of 7 Blessed Gems, or 70 Blessed Shards.

5. What updates to expect in Hunting Grounds and Unidentified Items?

If until now we were unable to introduce Lv. 270 and Lv. 315 weapons and equipment due to balance reasons, after the changes you can finally see these items dropped at the new Lv. 280-320 Hunting Grounds (entrance from Grynas Hills). 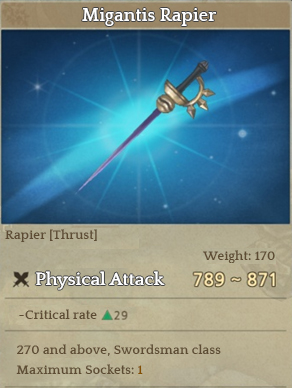 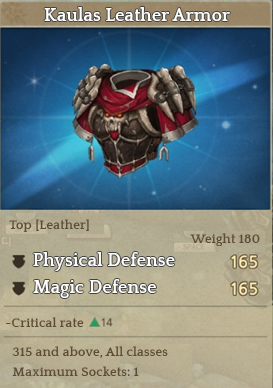 These new equipment items may have relatively low numbers, but all the options you need (1 magic, 2 rare) are there.

Other than these updates, playing in Hunting Grounds with a party of about 3 members is going to continue to be a good option, although solo play will be feasible as well.

6. Which items are changing to legend grade?

Lolopanther (Lv. 270) and Solmiki (Lv. 330) equipment sets obtained from Earth Tower will have their current unique (red background) grade changed to legend grade (see images below). As legend items, these pieces of equipment are going to provide higher stats than the ones they currently offer. 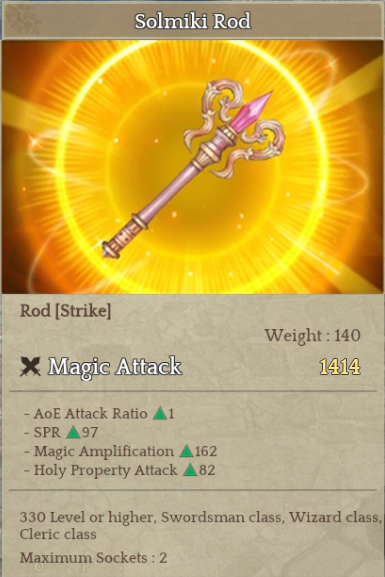 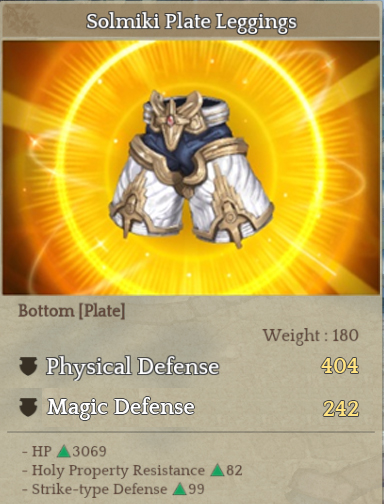 With these new combat system changes, specifically the new armor effects, we noticed more players wanting to switch their current armor for that of a different type, so we also plan to create a system that let you exchange your Lolopanther or Solmiki armor for the same items of a different type. We expect this system to allow players one single exchange per piece of armor, free of charge.