Hello. We are "Tree of Savior" development team. 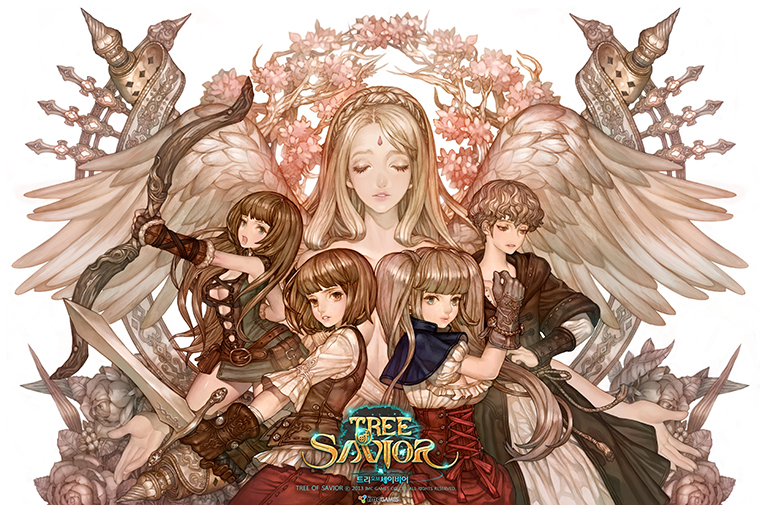 There were so many questions regarding the art concept of TOS, so I asked our art director Maggi directly.

Maggi has been with imcGAMES for a long time since “Granado Espada”.

▲The person who had drawn this poster from GE!

Q) What was the reason that TOS selected quarter view?
A) Back when our team was first formed to develop TOS, there were so many games out there which concentrated on new rendering technologies and detailed expressions.  There were just so many of them.  All of them focused on reality so it was very hard to distinguish each game by just looking at screenshots.  Instead of just showing characters’ backs, we wanted 3rd person point of view so that players can be more immersed into the game and since timing is crucial in this game, we thought quarter view fits well.  That’s why we removed angle rotations.  It was also easier to take a view around the characters.

Q) So quarter view was not just selected to reminisce about the old, classic games.
A) No.  Classical designs are just methods and not our objective. To enhance visibility, we even removed angle rotations which were available in the earlier version. We wanted players to really immerse into their characters so as we develop the game, characters’ representations became more and more simple. Eyes, eyebrows, and lips of the characters in the earlier version were very detailed, but we kept modifying the characters so now characters’ eyes are more emphasized.

Q) Are there any differences in the art concept of TOS compared with the other games?
A) We wanted to give players a feeling that TOS is like a moving fairy tale book or pop-up book so most of the textures are actually hand drawn by our designers.  Instead of relying too much on new 3D rendering technologies, we are trying to emphasize the details so it takes little more time.  The number of drawings that we have drawn since the start of TOS project is much more than the number of drawings that we had drawn in the past.

Q) Was there some kind of objective that you had in your mind when you were designing the backgrounds of the game?

A) I wanted to make TOS like a huge diorama.  We wanted characters to touch on or climb on neatly designed architectures and decorations.  To give fairy tale feeling, we emphasized on shapes as much as we had on the characters.  As a result, I enjoy myself even when my characters just walk on the fields in the game.

Q) There are some opinions that the game looks little dark.
A) We have thought about it a lot.  The world in TOS has some dystopian element so we couldn’t just make it too bright and too happy.  Instead, we wanted players to really immerse into the world.  The details and the expressions in the game should not be just cute and lovely.  Depicting the world as it is, and depicting the reality as closely as possible is more important to us.  If there is grass, then it should sway in the wind.

If there is a lever, regardless of how small it is, players should be able to pull it.

Q) How did you collect information?

A) To collect information and documents for backgrounds, costume designs and etc, our staff traveled to various places including Lithuania, Turkey, Nepal, France, China and etc.  We still have many more places to go.

▲'Fedimian' is designed based on the information we collected from Bhaktapur, Nepal.

Q) Please give a word to our fans who are waiting for this game.
A) We are working happily on TOS.  I hope our fans keep their continuous interest on TOS.

▲The initial wizard design in TOS. It may appear as a NPC in the future.

Okay so that’s it for our interview with Maggi.
AD Maggi is responsible for character designs, costumes, illustrations, NPC images, background images and a lot more in TOS.  She always has a drawing pen on her hand.  Send her a support message!