Hello, this is Tree of Savior Dev team.

This posting is about new content that will be updated in the next big update.

Savior successfully broke through the Beholder's forces at Delmore with the Royal Army led by General Ramin.

However, it was only one hurdle, and the war is yet over. This is a dangerous moment that could bring the entire world to destruction unless we find the Beholder within Delmore and stop his plans. Although it's an urgent moment, it was an unexpected being that stood in the way of Delmore.

The castle gate constantly rolls its unpleasant eyes and fires indiscriminate attacks on discovered intruders, blocking the front of the Army and the savior.

If you do not go through this gate, the return of the Royal Army cannot lead to the revival of the kingdom.

You can experience a new way of the game, unlike the previous raid in [Goddess Raid : Delmore Battlefield].

To defeat the boss monster, the members need to cooperate and calmly overcome the threats they face.

Delmore Battlefield consists of Solo, Auto Match, and Party (Hard). You can obtain the recipe for Party (Hard) difficulty in Auto Match just like the Saint's Sacellum. 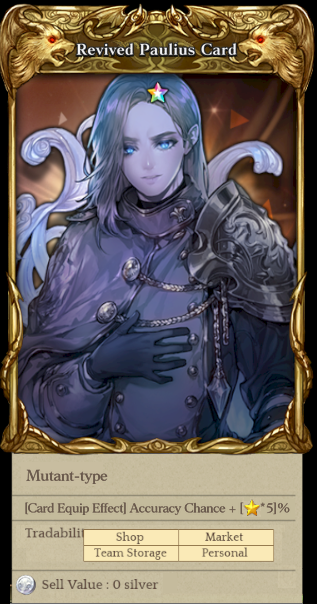 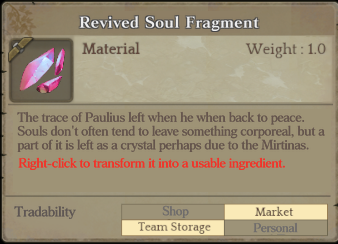 From this raid, the first clear graphic title will not be given from the party (Hard) version, and you can obtain the graphic title from the clear Achievement. Also, in the extreme version for the squad (fixed party concept) only, which will be updated in the future, a limited-time title that can be set up for one week will be given to the squad that ranks first in clear time every week.

New Accessory Isidavie will be added. Isidavie accessory can be crafted by the 'Succession' function to the Luciferie accessory with 8 TRA or above bound to the character.

It can only be succeeded to the same type, and only half of the ENH value will be transferred. (round down the decimal point). 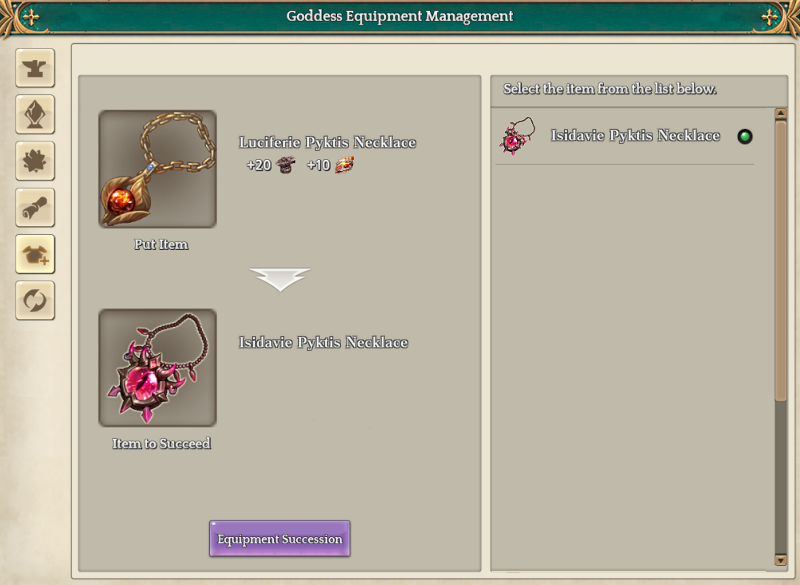 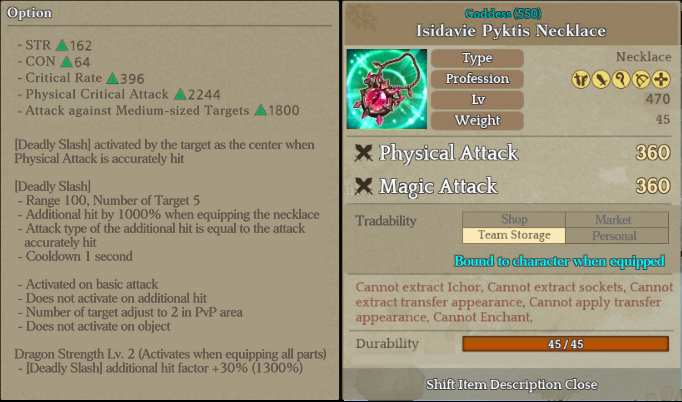 Only characters with Lv.470 or above can equip Isidavie accessory. Isidavie accessory can only be moved to the Team Storage once it's crafted and will be character-bound once equipped. You can Enhance the Isidavie accessory but cannot Transcendence and Awaken. You can enhance the accessory via 'Goddess Equipment Management' as other Vasilisa equipment and Goddess Token (Gabija) and Refined Revived Soul Fragment will be used as enhancement material.

Blessed Shard will be added for enhancement material from a certain value of the enhancement. 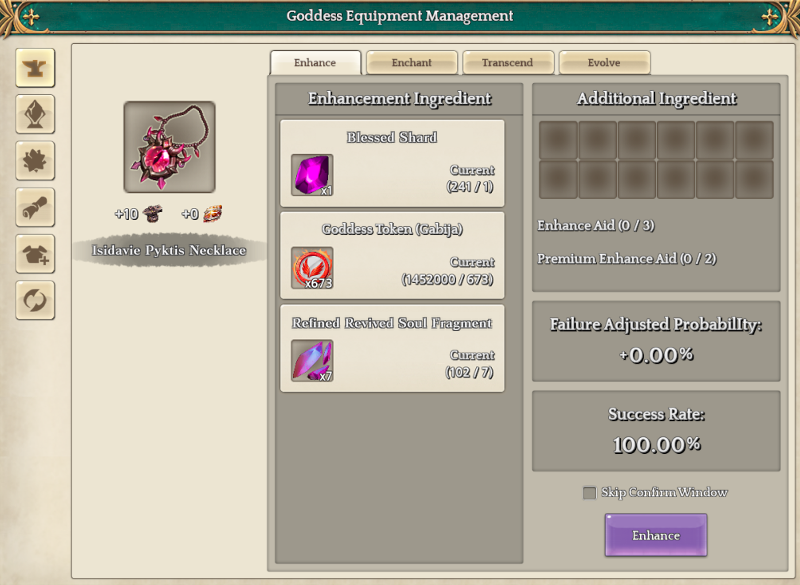 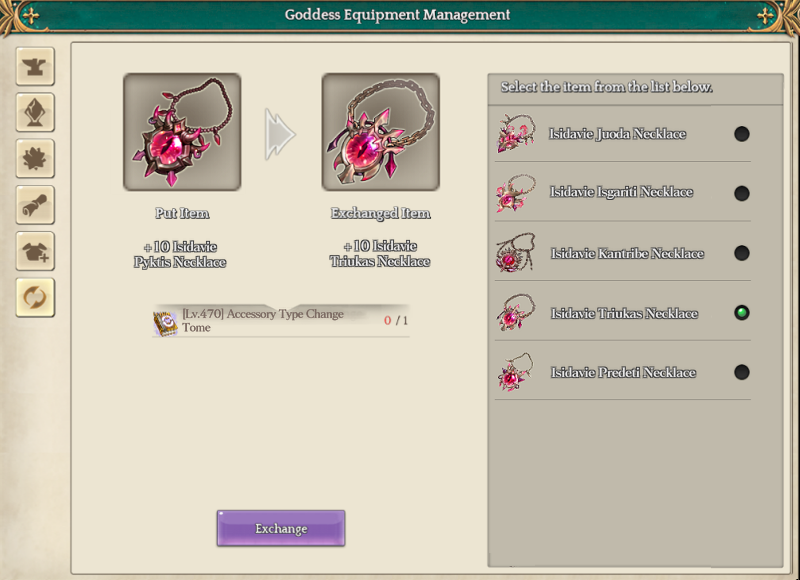 Goddess Message where you can obtain Earring, which is new equipment, Arcanum Brewing that you can craft useful consumables for various contents, and an Archaeology system that you can excavate materials for Brewing will be added.

You can start Archaeology contents via Geraldas sibling NPC in each town (lv.470). You can pay a certain fee to receive Archaeology missions and find the relics. 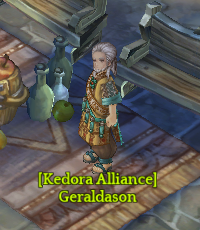 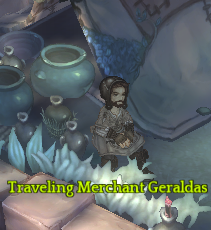 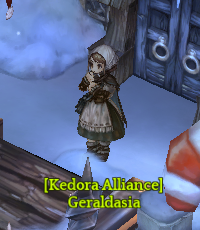 Once you receive the Archaeology mission, 3 areas that you can excavate will be activated. You can check the area at the upper side of the World Map (N).

Detector is needed to detect the relic and you can purchase the 'Basic Detector' via [Item Merchant] or purchase 'Detector' with medal.

You can approximate the distance to the relic and if you find the exact location, a pile of dirt where you can excavate the relic will be created.

When you excavate a certain number of Relic (3) per area, you can no longer receive more relics. The number of excavations will reset when you receive new Archaeology mission. 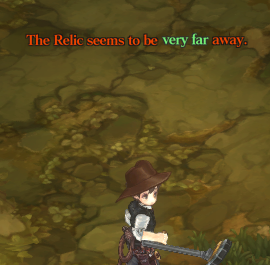 When you interact with the pile of dirt, the less detection the more, the higher level of relic can be received.

However, if you exceed a certain number of detection (50 times) while excavating one relic, you fail on Archaeology mission and can no longer excavate the relic.

You can exchange relics for other items via Geraldas siblings and those items will be material for Arcanum Brewing. 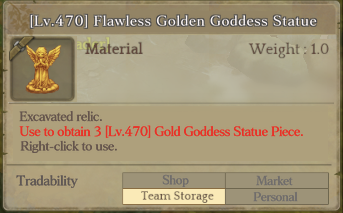 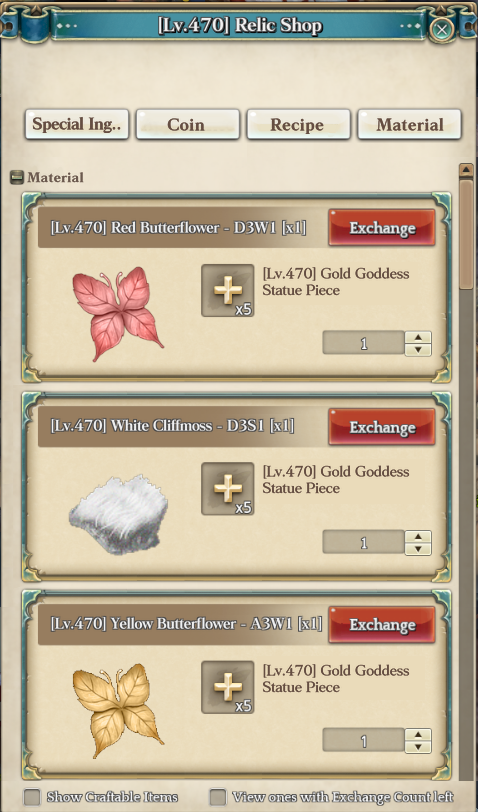 Arcanum Brewing is content where you craft combat items and Arcanum that applies special effect or increases stat for a certain time.

It is a system that you can receive Arcanum by using material items in possession to make Bottle indicated in the recipe to arrive at each destination within a specified poison (opportunity). 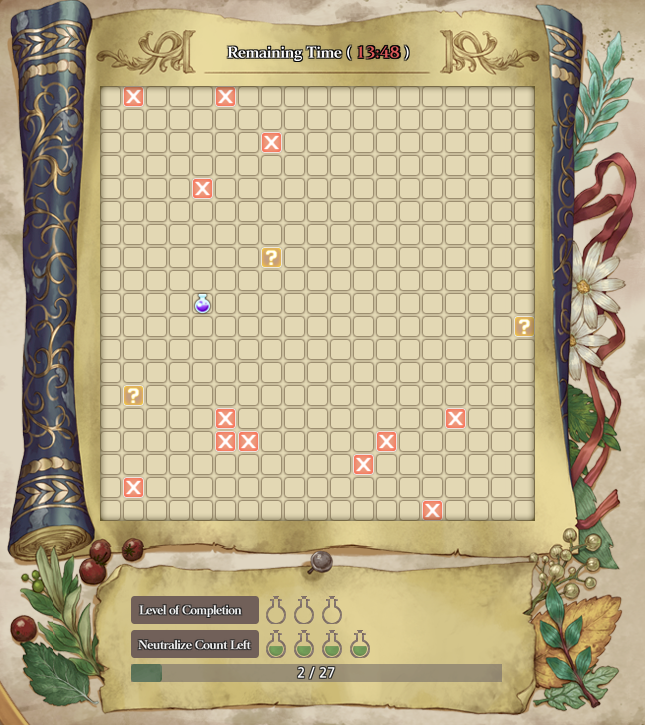 The process of Arcanum Brewing contents is as follows.

You need material to craft the Arcanum. Material can be received by playing certain content, and there are 2 kinds of material: Ingredient and Additive.

Ingredient is an item that moves the Bottle of the Formula. Each item has its movement direction, number of movement spaces, and toxicity according to its grade.

Additive is not related to the movement but an additional item. Currently, only Toxic Neutralizer items exist. Toxic Neutralizers reduce the current toxicity by a certain value or chance based on its rank. 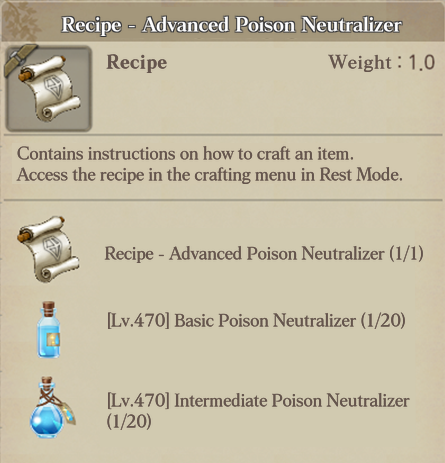 Formula is a basic material to make Arcanum. You cannot use Formula directly but can be used after identifying the Formula via 'Professional Alchemist' NPC in each town.

Please be noted that Formula cannot be used when a certain time pass after the identification. 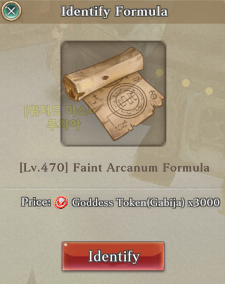 '[Lv.470] Faint Arcanum Formula' can be received via certain contents.

If you received all materials, you can proceed in Arcanum Brewing. The content aims to obtain rewards by moving the Bottle to as many destinations as possible within a fixed opportunity (toxicity).

1. Items in possession are displayed at the top. Select the appropriate item and add it to the grinder to move the Bottle to its destination.

2. The Bottle moves when clicking the ☞ icon.

<How the Bottle moves>

3. Repeat the 1, 2 progress and move to the destination.

Once the toxicity is full, you need to use the Toxic Neutralizer, or will no longer progress.

4. Arcanum will be extracted once you reach the destination.

Type of Arcanum is determined by fixed chance, and the number of Arcanum will be given by chance according to the current toxic value. 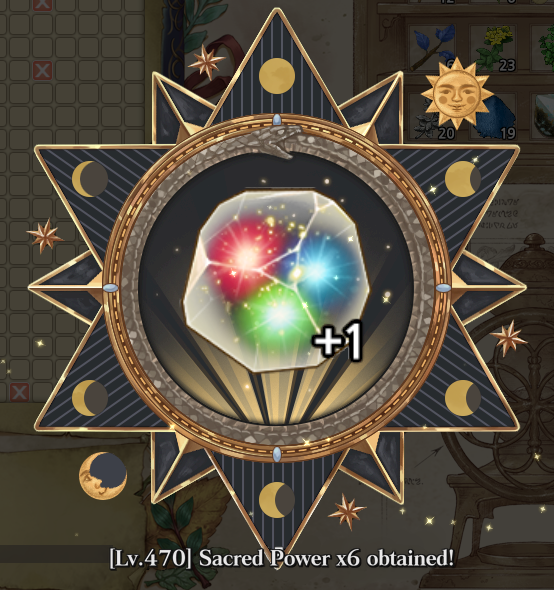 Up to 4 destinations can be created. If there is remaining toxic after the extraction, you can continue progressing to the next destination.

Arcanum greatly increases the character's specification, and Combat item gives an effect that helps the combat in Goddess Message: Memory of Flame.

Details of effect and function can be checked when applied to the game.

It is a content where you defeat multiple monsters by using the powerful party skill and combat gimmick (Gabija's Aura).

Because a powerful monster appears, not only the party members' specification but the judgment of using party skill and the combat gimmick affects the clearing of the content.

Party leader can use the party skill, and the difficulty can be lowered by using the item crafted by Arcanum Brewing that can only be used by the party leader. 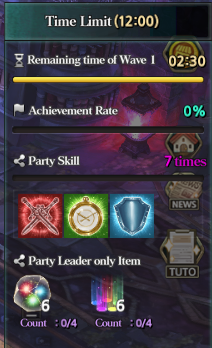 Gabija's Aura appears periodically during the combat. The number of lights suitable for the difficulty level is created among 5 kinds of lights. When the light is activated, various effects will be given to the monsters near the light.

Reward you can receive 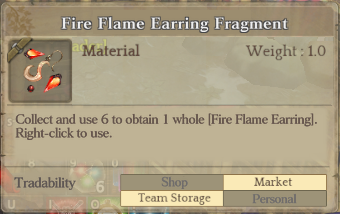 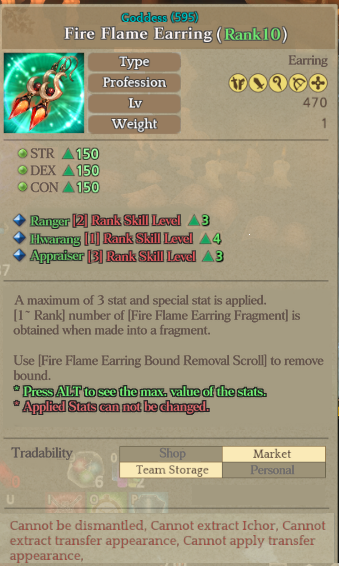 When you create the earing by collecting the fragment, the stat of the Fire Flame Earring will be determined.

UP to 3 Main Stats (STR/CON/INT/SPR/DEX), and up to 3 special stats(skill level increase per each rank) can be applied to the earing.

Class that increases skill level can consist of the same type, and the earing can be traded via market before equipping but will be bound to the character once equipped.

With the Contents/System update, Uphill Defense and Dimensional Collapse Point will be deleted. Mercenary Badge, which is the main reward of the contents, will be added to the Weekly Boss Raid Total Reward.

Total damage reward of the Weekly Boss Raid will be changed as follows. (The detailed date will be announced via patch note when applying to the game)

Related items will be changed as follows. (Multiply Token has the same effect regardless of tradability). 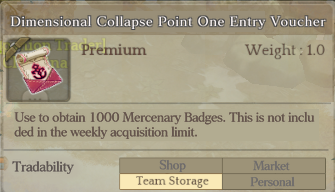 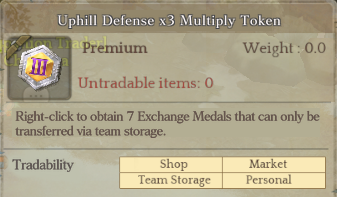 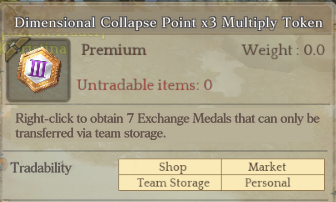 This concludes the posting about the new contents and system. The detailed dates will be announced via the patch note before applying it to the live server.

Contents above may change/be added/deleted when applying to the live server.