Hello, this is the Tree of Saviors developer team.

In this post, we will be introducing the adjustment on Archer class and a new class due to be updated in the future.

In order to ease the issue that only a few fixed builds of classes are used due to the buffs that require a certain weapon or property, factors will be adjusted and buffs will now become independent. 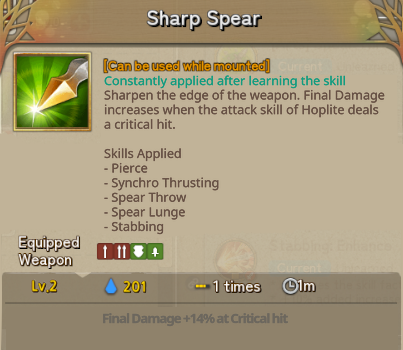 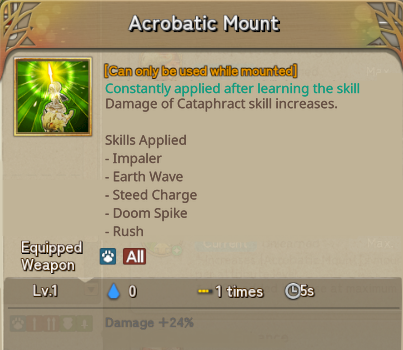 The condition of buffs applied to the caster will be changed to be applied when ‘attacking with skills of that class’, and value will be adjusted. The buff that lasts for 30 minutes will become passive skills to be applied constantly without having to use it every single time if it is learned.

Not all buffs applied to the caster will be limited to class skills. Some buffs that define the character or that require precise control and decision strategically will be changed to apply on all targets. In this case, it will be free of all requirements after the update even if it was required to use a certain weapon or property in the past. However, because it will now be applied to all attack skills, it will have lower performance compared to the class-limited buffs. 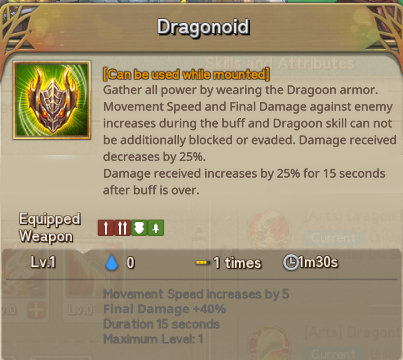 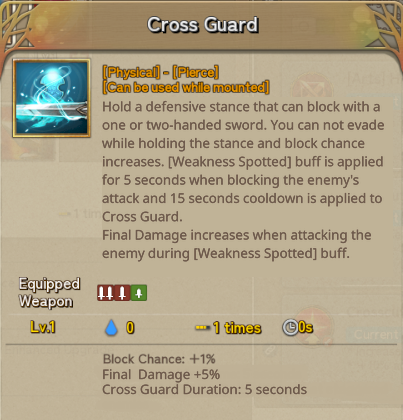 For example, Highlander’s Cross Guard is a skill that receives benefits for slash attacks for a moment after succeeding Block. This type of skill will now receive benefits in all types of attacks. However, the performance of the skill will also be adjusted.

The chance of firing Arbalester’s Homing Arrow will also apply on all attacks but its frequency will be lowered.

Dragoon’s Dragonoid will also be applied to all attacks since it is a skill that can make an interesting outcome that way, having short duration compared to the cooldown and a high returning benefit. The performance of the buff will of course become lower than the current value. 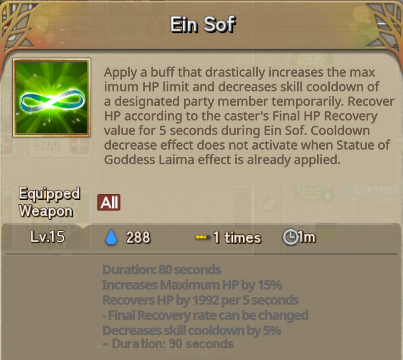 Mechanism of skills that work as the party buff by buffing or debuffing the party will be maintained. The limits related to certain types of weapon or property will be excluded as much as possible.

1. The party buff applies on all attacks and 2. it is also applied to other party members.

Some skills or attributes can be deleted during the process of reorganizing the buffs.

Even when we remove the weapon/property limits of the buff, using the same property is still favorable while "Increase in Final Damage according to Attack and Defense Offensive property" takes a big part. Therefore an update reducing the Offensive property damage will also carry out at the same time.

The Skill Factor of every other skill will be readjusted according to the buff of the reorganized class. When higher the buff performance of the class is, lower the factor or number of skill will be. In addition, when setting the DPS of the attack skill, the reference values such as range, number of targets, additional effects, and duration are changed. Some skills or attack functions can be excluded during the skill adjustment as well.

Stats and requirements of Vaivora Vision and Goddess’/Demon God’s Armor, which has a great impact on the skill factor, will be changed along with the skill factor adjustments.

The following reset/support event will be held with the update, due to the situation that requires a total rebuild of the existing classes.

A new class “Hwarang” will be added. New Master's Request will also be added and

Achievement Title and Common Costume can be received as a reward.

Hwarang uses a two-handed bow and maximizes its ability when fighting with allies. Hwarang values ​​camaraderie and collusion among its members and spends enough time cultivating their beauty. This culture of cooperation and self-management largely influenced the Hwarang’s tactics. A group composed of or led by a Hwarang is usually the first person to announce the victory on the battlefield.

Hwarang is a two-handed bow class that can both attack and support the party. Skills can be used in a wider range in a party than when you are alone. They can also launch an additional attack on their own or give a beneficial buff to their allies after hitting an enemy with skill.

With the addition of Hwarang and the independence of the buffs, some classes in the Archer will have skill reorganization.

Targets are classes that use Two-handed Bow,  Musket, and Cannon.

Next posting will be about new episode (14-1) , new raids and contents, and remake of Scout class.