The 4ever Update: Detailed

We'd love to introduce our 4ever update in detail. Today's post will cover this large-scale update from A to Z.

Currently, there are 4 kinds of equipment rarities (magic, rare, unique, legend) which grant random stats to the equipment when identified by a magnifying glass item. Magic and rare equipment is often neglected by MMORPG players because lower rarity typically means lower bonus stats for the equipment. Effective from the update of Episode 12, the upper limits of random stats are now equal regardless of rarity. On the other hand, the lower limits are set differentially. You can view the upper/lower limits in the chart below:

Now that the lower grades have a chance to receive maximum stats, we anticipate the saviors’ burden of spending hours in the field in order to obtain higher-grade equipment to be eased.

Equipment with Unique rarity has become far harder to obtain from looting, but the increased chance to gain better stats will compensate your efforts and time. Our dev team has been working on this modification of the random stat system to ensure pleasurable farming for players.

The dev team has also decided to reduce the value deviation of random stats. As a result, formulas using random stats are modified and there will be newly introduced stats on unidentified equipment while some of the pre-existing stats are deleted.

The new stats and the max value of them for equipment dropped after the 4ever update and Episode 12 are as follows:

* There are 5 kinds of ability stats.

These items are to become obtainable from [Goddess' Grace]. With the new magnifiers, we intend to ease saviors' burden of constantly re-identifying their equipment for better performance. 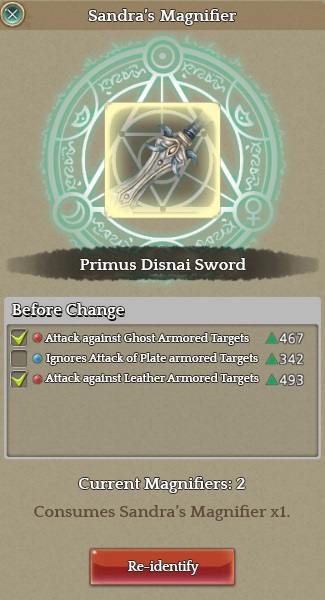 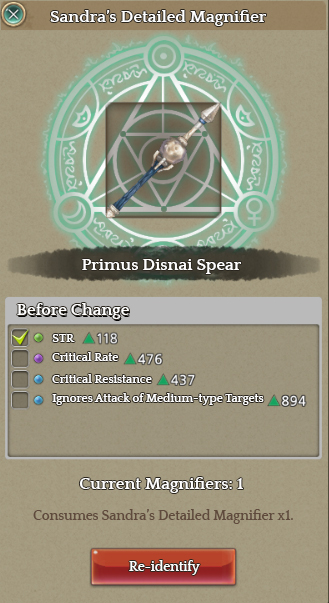 The Ichor system currently plays a large role in enhancing equipment performance. Unfortunately, this is often considered an obstacle to progress by saviors who face difficulty obtaining the desired Ichors. The system will become more player-friendly upon Episode 12 update.

The chance of successful Ichor Extraction will be increased two-fold. This revision will facilitate acquiring Ichor from equipment with random bonus stats. We hope this can bring you a better experience with the Ichor system as Lv. 430 unidentified equipment offers far better stats.

The number of items required for Ichor Transmutation will be reduced 3 to 2.

Although transmutation was designed to offer players a concrete chance to obtain the Ichor that player desire, Ichor Extraction has always been the alternative. We anticipate more players to utilize Ichor Transmutation after this change. 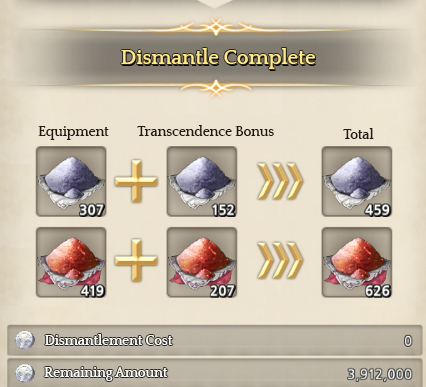 We are introducing a new system to transfer the additional effects gained from awakening and enchantment from one to another without any losses. You will soon be able to transfer equipment effects via the NPC in Miners’ Village, Vaidotas. Bonus stat transferring will cost a little silver. The receiving equipment must have the identical rarity, availability level, and part with the equipment you are extracting stats from.

Currently, each weapon type in ToS has a different average attack value. As we have noticed irrational imbalances among classes after the recent balance patch, there will be adjustments to weapon attack value.

We categorized weapons into 2 groups by one/two-handed and increased the average attack ratio based on the weapons with the highest value from each category.

Also, there will be changes which make the attack value ranges even wider to secure the unique feel of each weapon, which could have become less prominent in the case of equalized attack value.

One-handed weapons will be more reliable, dealing damage to foes steadily under any combat conditions with a small gap in the attack range. Two-handed weapons will be more effective with certain conditions met. For example, a player with a musket can actively reduce the large min ~ max attack range with the skill ‘Sniper's Serenity’. Plus, splash damage effect that attacks up to 3 foes is planned for cannons. We set the attack range wide so the weapon has a high potential with the effect.

Leather armor was originally designed to allow players to utilize rather aggressive combat styles while providing the lowest defensive performance compared to cloth and plate armor. As a new combat formula will be applied on PvP mode upon Episode 12 update, which does not include Critical limit value, leather armor will lose its strength in PvP mode. Leather armor’s DEF will be increased by 1.5 times to compensate its lost tactical feature.

A new sub-weapon, Weapon Accessories will be added. 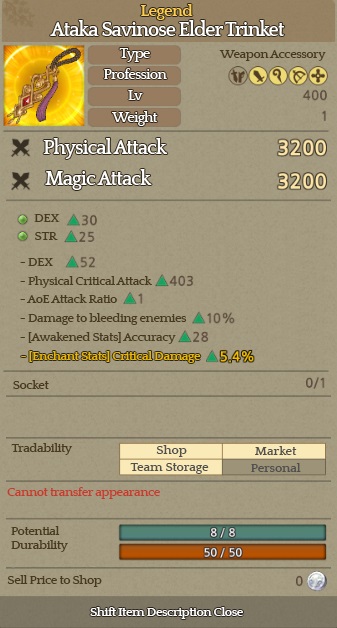 A new equipment, Ark will be added.

An Ark can be equipped on an Ark Slot and provide diverse additional stats. You can upgrade Arks by spending in-game materials and when it is upgraded to a certain level, it unlocks its special effects to help the player. 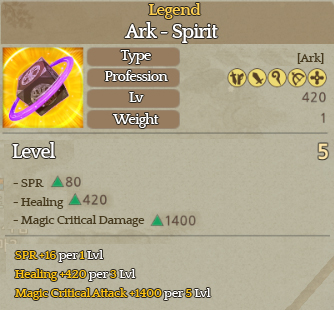 You will have your very first Ark as you go through Episode 12 and are soon able to acquire other uncommon Arks from content rewards.

A new Lv.430 Legend equipment will be added. NPC Teliavelis in Fedimian will help you craft the new equipment if you bring the material item ‘Brikynite’ obtained from the newly introduced area. 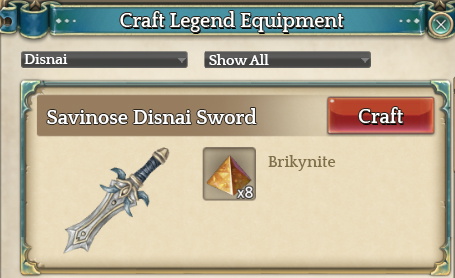 This new Legend equipment will embrace a higher level of attack and other random stats compared to Savinose Legva. You can visit NPC Vidotas to apply new Set Stats on your equipment.

New Unique equipment with fixed stats will be added. The equipment is obtainable at a low chance by hunting Elite monsters in the new Episode 12 areas.

The Elite monsters in stage 6-7 of the new Challenge also drop the Unique equipment. The drop rate is fairly low but it has better Ichor as compensation.

We have thought that the formula for attack by type needs to be adjusted as the current formula tends to make players’ efforts to increase the attack value meaningless. Some attack values such as Slash attack rely on the equipment available for only certain classes, which results in an increasing burden for players to set more equipment. In order to prevent the issue and let players set equipment based on their tastes, all attack stats now depend on the armor, size, and creature type of the target.

Attack by type will be added to the damage increase value as +% form. The modified formula is as follow.

The following type stats are applied to Formula (1).

The following type stats are applied to Formula (2).

HP/SP Recovery now depend on your max HP/SP. The higher max HP/SP you have, the more healing efficiency you can gain. The modified formulas are as follows.

In short, the maximum HP/SP you can restore at once is 20% of your total HP/SP.

Currently, the only way to interfere healing in ToS PvP mode is using CC skills directly upon the healing characters. Supporting characters are intended to take an important role in battle but we decided it is too restricting to interfere healing, so we are introducing new skill effects for some classes to inflict debuffs to reduce received healing. The skills will allow players prevent healing indirectly. Meanwhile, the victims can lift the debuffs with their skills making the whole battle more interesting.

The Classes to receive the heal control effect are 39, including new classes, and the detailed information for the skills can be viewed at the follow-up [Supplement] post.

There are abundant skills to grant buffs and debuffs in ToS and we decided to introduce skill effects into existing skills to nullify or worsen buffs/debuffs to enrich battle tactics.

The skills to receive buff control effects are 47, including skills for new classes, and the detailed information can be viewed at the follow-up [Supplement] post.

The skills to receive debuff control effects for allies are 29, including skills for new classes, and the detailed information can be viewed at the follow-up [Supplement] post.

The current formula is significantly imbalanced and advantageous to the attacker. This leads players to except defensive elements when selecting equipment. To resolve this issue, we redesigned the formula as a symmetrical function. We anticipate a wider range of settings and tactics in PvP situations.

Also, Block damage reduction rate will be changed to 30% from 60% and it will be 60% only while putting up a guard.

The attack stats [Critical Rate, Block Penetration, Accuracy] now have basic chances of activation. The chances are as follows.

The formula to calculate the final value is as follows.

The following type stats are applied to Formula (6).

The dev team wished to raise the value of character leveling by offering more benefits to high level characters in order to encourage players to level up.

There will be an advantage granted for Evasion of the character with a higher level than the opposing character based on their level difference. This additional Evasion value will be applied on the final value with a multiple operation.

The new Instanced Dungeon is for characters with Lv. 400 or above and you can enter via the Level Dungeon NPC in each city.

Each character can clear the dungeon 3 times a day and you can reset the count by using [Instanced Dungeon Reset Voucher].

Fields for the added instance dungeon differ each day.

The new instanced dungeon rewards players with EXP, Talt, and Blessed Pieces. The rewards will be given depending on the completion rate, except Blessed Piece.

A drop bonus is given depending on the number of members participated in the party. The modified reward system for challenge will be applied on the new Episode 12 areas.

A casual mode was added for single players. However, the rewards from it were not satisfying enough, resulting in a low motivation for players to participate in the mode. Now that Goddess’ Blessing Event will be added, which begins upon clearing a dungeon for 60 seconds offering more rewards, players would acquire more valuable items from the content.

The new event is available via the icon at the top right corner of the screen. 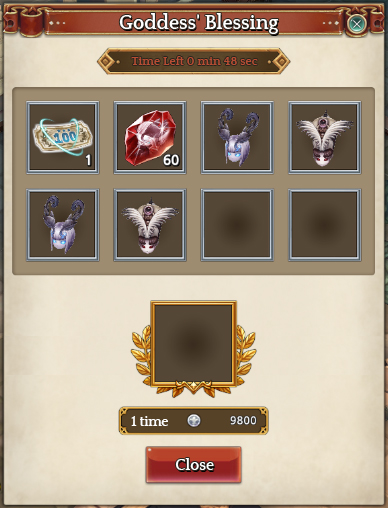 We expect to raise the interest in consuming the content by offering a chance to obtain valuable items with a little silver spent. The event will not continue once the player leaves the dungeon.

That will be all for this post. We appreciate your interest in our 4ever update. Thank you.

* The information disclosed above relates to works currently in progress and are subject to change with future development.