To the Ruins of the New Capital: Episode 11

Taking a departure from the old rank system, the dev team has decided to expand on the TOS world in increments of episodes. The dev team is currently focused on developing the new Episode 11 for TOS and would like to share some of its contents with you, our dear readers.

Episode 11 will include 11 new areas, new NPC’s, new monsters and demon lords. The current level cap of 390 will also be increased to 420.

The Remains of the Astral Tower 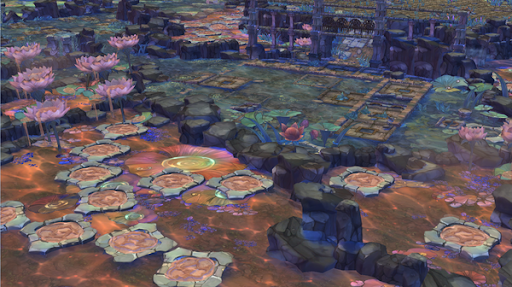 The Last Remaining Gateway to The Capital 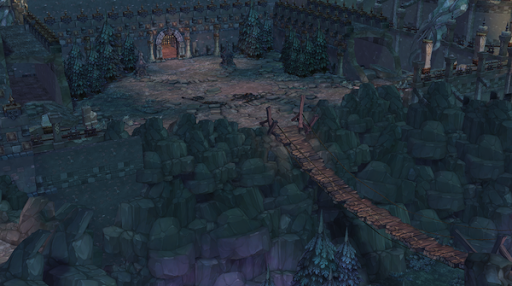 The outer walls that protected the Kingdom’s Capital had worn down following Medzio Diena. The brave soldiers that manned the walls had gone missing and only the wounded survivors remain within the wall’s limits, hidden away from the prying eyes of demons. The story of the Kingdom’s survivors start here at these very walls.

The Last Revelation and the Goddess Medeina

Despite being under the watchful eye of the Demon King Kartas, the Goddess Medeina has decided to reveal herself to the Savior in order to pass on the Last Revelation. 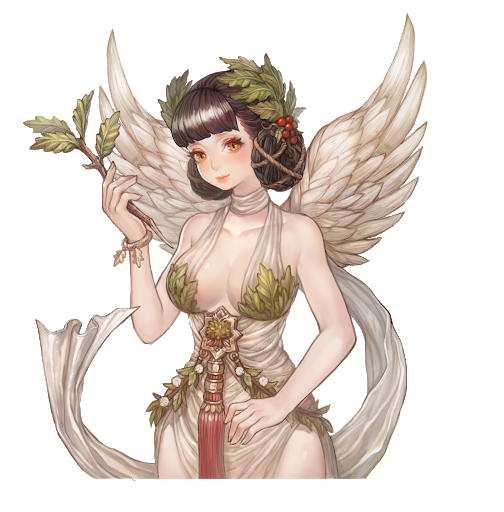 The Demon King Kartas is scheming to bring Medeina, the Forest Goddess, under his captivity behind the Demon Goddess Giltine’s back. This story unfolds in the northern regions of Parias Forest.

The dev team is aware of the feedback that there should be better ways for the players who want to immerse themselves in the TOS world to level their characters, not having to resort to hunting the fields. We wanted to make completing quests a worthwhile investment for our players by providing equipments and items that will assist their characters in reaching the new level cap.

This feature had been implemented previously with the Re:Build update and we will continue to do so with our future updates as well.

Pajauta The Guardian of the People 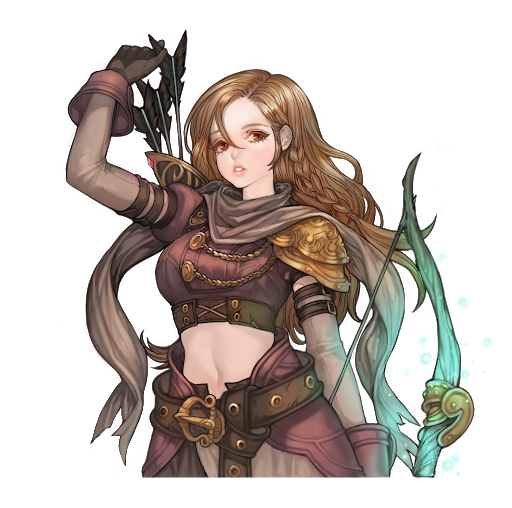 Pajauta is the new NPC who has saved the people from the wrath of Medzio Diena. Even before Medzio Diena, she had played a major role in the investigation of demon cults and many other problems that plagued the Kingdom behind the scenes. Some had even gone as far as to call her the second coming of Lydia Schaffen, but in the end, she had given up all hopes as the situation in the Kingdom got worse after Medzio Diena.

In her moment of despair, she had heard news of the Savior and set out to find you in order to ask for your help in returning order to the Kingdom’s northern regions.

The dev team has prepared a prerequisite quest for Episode 11 to help players ease into the new content without too much trouble. You will travel the northern regions of the Kingdom with Pajauta at your side and she will guide you towards the last revelation.

The New Raid Boss and the Main Quest

New demon lords await you in Episode 11. Players will be able to preview the attack patterns of the new raid bosses while playing through the new quest lines.

Legend-grade items can now be acquired through many different contents.

This will reduce the time and effort it takes for players to reach the level at which they can partake in the game’s most densely populated contents. Players will still be required to upgrade their items, but we will now provide a larger variety of ways in which the base items can be obtained.

Players will now be able to obtain Legend-grade equipment by hunting monsters in the fields.

Monsters will drop the materials required in crafting the new Legend-grade equipment and the crafted equipment will be given random stats. The set bonuses will be predetermined and new equipment will be categorized by different attack properties.

The materials required to craft items earned with previous raids had to be earned in the fields. The abundance of the materials was high in comparison to the actual drop rate of the recipes because they could be obtained relatively easily through Challenge Modes, which made the Raids feel more like a grind.

The new raids will be developed so that they drop legend recipes, unique recipes and finished legend items that can be traded. Also, the required materials for crafting new equipment from acquired recipes will be reduced to make the process quicker.

Field Bosses provide a competitive PvE experience for players. However, they have not been of great importance because of the reward system that is based on the grade of the Field Boss and lacking reward content. We are planning to introduce new Unique ~ Legend grade items as Field Boss rewards with set bonuses that are different from the equipment acquired from general Raids.

Seals, magic stones and various tradeable Unique and Legend-grade items will be provided through a 1:1 battle with the Hunting Grounds Bosses. The difficulty of the new bosses will be much higher than the bosses available in Irredian Shelter.

The items below the Unique-grade can be used to extract Ichors, while 2-4 different types of Legend-grade set bonuses will be available for each of the different content.

The upper-level raids will have their entry limits increased and have different requirements or rewards to compensate for the changes. For example, if the Velcoffer raid can be entered 2 times per week per team, its reward will be increased by x fold. Not only will the rewards be increased, but the finished items and recipes acquired in the raid will also be made tradeable.

The raid rewards will also not be issued via cubes but from treasure chests that players can open after they have defeated the raid boss.

The maximum values of the random stats that appear upon identification will be increased as well as the increased occurrence of useful options such as increased critical rate.

You can use additional materials at the Alchemist shops to add Awakening bonuses with greater effects. 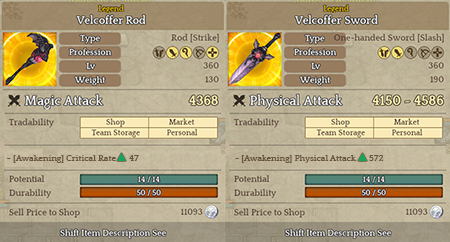 The level requirement for new items introduced in Episode 11 will be Lv. 400.

Players will be able to pick and choose the set bonuses to be added to the Lv. 400 items.

A transmutation system will be introduced for Ichors to ensure that players can get 100% Ichor extraction. Players can use three items of full potential for extract Ichors successfully. The Ichor for one of the three items used will be extracted at random. 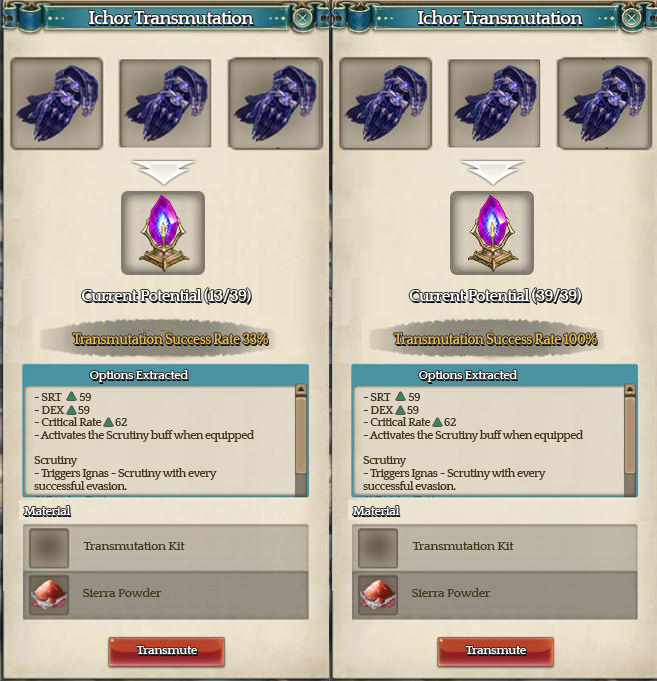 A new system will also be added that lets players unequip Ichors from items that have already been equipped to legend-grade items. It will consume silver but there will be no probability involved in the process. This new system will be introduced on the same date with the new legend raid equipments.

Following the update, all legend raid entry limit will be set to 5 times per week. All rewards will be adjusted accordingly and players will also be able to obtain Legend Raid Portal Stones from the 6th and 7th stages of Challenge Mode, which will require a regular Raid Portal Stone to be crafted.

With the introduction of new classes, special abilities for each of the class trees will be readjusted. These class-specific abilities are chosen to be skills that will help each class survive in battle.

The new Tiger Hunter class uses the musket as their main weapon and its attacks have bonuses against beast-type enemies.

Matross is a class that uses cannons whose specialty is utilities and offers the player increased mobility, buffs and debuffs.

Ardito is a class that specializes in close-quarters combat using the dagger and continuous damage using grenades and molotovs.

Sheriffs are a class that wields the pistol as a main weapon and specialize in focusing its damage on single enemies. All Sheriff skills can be used while being mounted.

* The above information is currently in development and is subject to change before the release date.